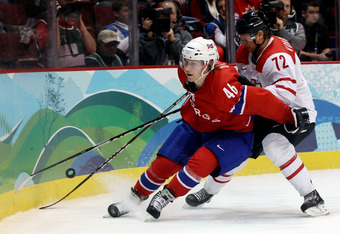 At age 24, Olimb has a fair share of experience.  Last year Olimb not only suited up for Frölunda HC in the Swedish Leagues, but he also play in the Olympics.  For Team Norway he produced two assists in four games.

Over the past two season Olimb has appeared in 97 games for Frölunda HC.  In that time he netted 27 goals and contributed 53 assists.  Olimb has shown considerable growth in the circle during his tenure in Sweden.

Unlike Patrick Sharp of the Blackhawks, Olimb is considered more of a play-maker than a sharp shooter.  Being 5’10” and 170 pounds provides for quickness over brute strength.  Due to a thin supply of centers, Olimb will be given a chance in training camp to make the NHL team.

Odds are best with Olimb starting the season in Rockford, IL, with the Rockford Ice Hogs.  The Ice Hogs will be looking to provide depth this season.  With free agents leaving and draft picks flooding the organization, Olimb should assume a solid role with the Blackhawk affiliate.

Check out these kids games.

The Blackhawks are currently looking in and out of the organization for a center.  Jonathan Toews, Dave Bolland, and Patrick Sharp are the only designated centers with contracts.  As many may know John Madden, 37, is slated for free agency.