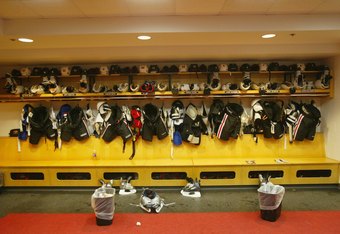 The aftermath of the salary cap whirlwind has left many fans looking up and down the Blackhawks’ depth chart wondering who is actually on their team.

While the “elite” of the team has primarily remained intact, the faces and personalities that have left cause a moment of reflection in the locker room.

On and off the ice, the Blackhawks moral was well known and envied by the opposition throughout the season. The ability the team displayed following losses or playing through multiple injuries made for a season that ended with a Stanley Cup and a nationwide celebration.

What the Hawks accomplished was completed with hard work, determination, and focus.  Period.

The mentality Joel Quenneville brought to the Chicago bench was, “never make the same mistake twice,” and it showed.

While there are always lows throughout a season, the Hawks put their stamp on the path to success. The playoff run the Hawks made went exactly the way it was scripted and…for the most part. With the exception of the two road losses to the Flyers, the Hawks never lost two consecutive game.

This was accomplished by not only playing as a team, but because someone stepped up when a play needed to be made.

The proof up above shows that the Blackhawks depended on more than two lines to succeed. Players stepped up and when they weren’t expected to.

Who thought Byfuglien would have scored five game-winners in the playoffs?

Who thought Eager would have the winning tally against Philly in Game 2?

As the 2010-11 season comes into focus, three of those players will be in a different sweater.

Dynasty is hardly a word to be thrown around with ease, but yet people assume one exists.

A team that believed its destiny was to be Champions now has to re-focus on what got it there. Fan favorites such as Byfuglien and Versteeg , while being missed by the hockey enthusiasts in Chicago, will be forgotten. While accumulating support through success and fan-friendly personality, a team naturally will adapt and change as needed when facing adversity.

The Blackhawks are probably more aware than any team of what it takes to go from the cellar to the mountain top. While a long journey, the turn-a-round was completed in just a few years. The Hawks will only be as successful as those who can come in and fill the voids left by the recently departed players.

With the infamous “core of players” still intact, it would be hard to imagine the Hawks miss the playoffs. Of the players leaving, they accumulated for more situational quality then offensive production.

Obviously there can be statements made for many other who may be given an opportunity throughout the season.

Players such as Kyle Beach and Shawn LaLonde , if they don’t earn a spot in camp, will surely at least get one or two opportunities to earn a spot during the season.

Beach, 20, has a nose for the net and is an asset on the power play.  Being a power forward, Beach is plagued by perceptions of attitude problems. He is quite capable and he will be given every opportunity to develop as a professional.

LaLonde , also 20, has the ability to jump into the rush when required. Though he displays good instincts on the ice, he needs to show that he can be consistent when it comes to defensive decision-making.  If  he can develop his strength, LaLonde will be a true “top 4” defenseman in the future.

Lying ahead is just what the Hawks need… adversity and a challenge.

The faces of the Hawks are changing, and with that the skepticism rises. With the players who have already departed, 73 regular-season goals are gone as well.

Where will those come from next year? The question remains, but the Blackhawks have the ability to answer it.

The doubters will exist. It will be up to the 20-plus players donning the Blackhawks’ sweater to show why they are the defending Stanley Cup Champions next season.