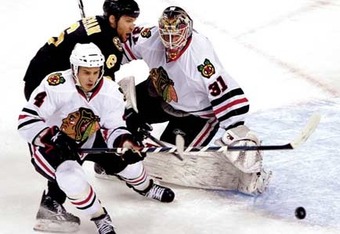 As reported across all major sports websites, fan blogs, and twitter accounts alike, is the San Jose Sharks signing of Niklas Hjalmarsson to a $14 million, 4-year offer sheet.

In Blackhawk fan-dom, this means they have seven days to match the deal or be bitten.

During the past week the Blackhawks organization has been the focus of restricted free agent talks with both Hjalmarsson and Antti Niemi.

Expected, were the worries regarding the possible signing of the Finnish net-minder.

With the recent signing of Jaroslav Halak in St. Louis to a 4-year, $15 million contract, the Hawks were already projecting a tight squeeze.

Now with the Sharks seemingly determined to not only bolster their defensive corps, but to strip their nemesis of a valuable tool, the Hawks have a hard decision.

Many reports have had Niemi ideally going for nearly $3.5 million, with Hjalmarsson being signed for nearly $2 million.  It made sense at the time assuming we could sign the young players for around $5 million.

That is no longer a reality.

What Bowman has to decide is who is worth what.  At what point do you say enough is enough?

Assuming one of them stays, assumptions can be made that the Hawks go with Hjalmarsson.

A team built on a dependable, defensive corps can provide the same oppotunity for the next goalie to do their “thing” in Chicago.

Give credit where it is due to Niemi, a second year net-minder simply doesn’t get the money he is asking for after just winning a cup.

Some of the saves… priceless.

So is he replaceable?  I’d still think so.

While Niemi did thrive in the playoffs, he also was the back-up the majority of the season.  Meaning he had plenty of rest going into the postseason.

There are no doubts that Niemi has the ability to make key saves, but you can also assume there is someone that can be brought in to do the same.  The Hawks aren’t looking for a Halak who can come in and make 40+ stops on a regular occurance, nor do they need one of that caliber.

What they do need is someone who can make a save when needed.  When the game is on the line at times.  Someone who can stay focused when facing 25 or less shots on a nightly basis.

Could Bowman be faced with the biggest choice of the off-season?  Possibly. Especially seeing as this may be the first true blow to the off-season.

If Hjalmarsson is released look for Dylan Olsen and Shawn LaLonde to get a spot on the roster.

Should Niemi go, starting watching for the Hawks to bring in a cheaper veteran to share the workload with either  Corey Crawford or Hannu Toivonen.

All in all the decision will be criticized as both sides have their ups and downs.

One things for sure, the fans surely will be ready to vomit when this merry-go-round finally comes to an end.