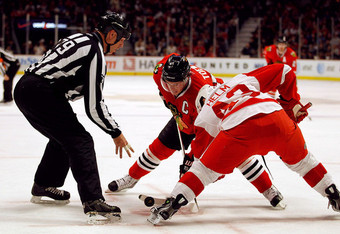 During the 2009-10 campaign, the oft-mentioned offense is what continued to excite the Chicago Blackhawks fanbase.

Known to be one of the most exciting shows on ice this past season, there may not be one aspect that the Blackhawks can hide or consider “underrated” come the drop of the puck on Oct. 7 in Colorado.

Without looking anywhere but at these stats, the casual sports fan could tell you that success can’t hide behind the numbers. Throw in the names of Jonathan Toews, Patrick Kane, Marian Hossa, and Duncan Keith, and you stare at some of the newest heroes to be scratched upon the Stanley Cup.

So what exactly is the point?

If there is one part of the Blackhawks’ principals that has gone unnoticed, it has been the dominance of overwhelming opponents in the face-off circle. Those dismissing its importance should dig a little deeper into aspects created from a simple face-off win.

A victory, for starters, means puck control, and in an era where speed and skill attributes are key. Throughout one game numerous face-offs take place. What possibly develops are scoring opportunities and general puck control.

How important is a face-off?

What so many take for granted is what winning a face-off provides. Puck control, as mentioned, can lead to quality scoring chances. A win also can do much more if done within the defensive zone by enabling teammates to clear a puck or transition into an offensive attack.

Last year the Blackhawks compiled a 52.4 percent face-off success rate, which ranked them third in the NHL.

While Toews has become a face-off dynamo, Madden will be missed this season. Some may see that Madden and especially Bolland didn’t fare as well, but clearly the reason is that they were matched up against the top center-man in the league on a nightly basis.

The biggest surprise of the season was Sharp’s performance after many years strictly on a wing. Adding another weapon to an already diverse arsenal has made Sharp perhaps one of the most talented players on the team.

Sharp will undoubtedly center the second line next season. Flanking the Slovakian duo of Marian Hossa and Tomas Kopecky will perhaps become a reality next season should Kopecky find more consistency to his game.

The remainder of the depth is perhaps what is the trickiest.

Jake Dowell, Jeff Taffe, and Evan Brophey are perhaps the only players capable of facing NHL talent. Dowell is perhaps the player slated for the fourth line.

He accumulated only 23 starts in the past three seasons, and while the fourth line doesn’t seem all that attractive, the line often faces the top offensive threats at times. Should Dowell desire to make a presence and assume a spot on the team, he will do so in the circle and not in the goal column.

Madden has made a living having stone-hard determination to win important face-offs. Should the Blackhawks continue success, this will be important.

In order to score a goal, one must have puck control.

In order to kill a penalty, you have to be able to clear the zone.

The process of winning a game isn’t measured by big hits and fancy stickhandling. It simply comes down to managing the puck. Every second counts—just ask Nashville after allowing Kane to score the game-tying goal down a man. Just ask Philadelphia how different it could have been had they cleared the puck instead of allowing the Blackhawks to cycle the puck that one last time.

If there is one part of any game that can singlehandedly change the outcome, it would be in the circle.

Should the Blackhawks continue their winning ways, the face-off numbers will factor into the successful equation of the offseason movement.

The Blackhawks are young, and most of all, they are built on fundamentals. Where there is a puck, there is a competition.

With Toews as captain and perhaps one of the face-off elite in the NHL, the Blackhawks won’t worry. A team without fail is one who practices the simple skills. A face-off can win a game…granted, one could also result in losing one too.