At certain points throughout every game decisions will be made.  While some believe it is the talent on the ice that wins games, clearly the credit falls on the shoulders of who chiseled many of the fine athletic talents many posses.

An NHL season is a war, throughout the season many battles are fought.  It is the role of the coach to prepare your team for every battle by establishing the correct lines and pairings.  One on ice match-up throughout an entire 60 minutes could result in a win, or more costly a loss.

While the players often get the majority of the credit during stretches of success, NHL head coaches receive much of the blame during patches of adversity.  It is important that a team is built on the backbone of their head coach.

A rookie head coach has to start somewhere.  After great success with the Manitoba Moose, Scott Arniel was offered the Columbus Blue Jackets, Head Coach position on June 8th.

While having previous experience as an assistant on the 2005-06 Buffalo Sabres, it will be an awakening for Arniel.

Being in perhaps one of the best established divisions, Arniel will have perhaps the deck stacked against him come the start of the 2010-11 season.

Apart from experiencing success at the AHL level, including a Calder Cup Championship with the Milwaukee Admirals as an assistant, Richards struggled at times throughout the 2009-10 campaign.

While much talk surrounds organizational roster moves and spending, the task at hand will only get tougher for Richards.  The seat will be hot and anything but a successful start could make for an early exit with the Wild.

Now with the task of trying to re-establish credibility to an organization who witnessed one of the worst seasons last year, Renney will attempt to do something he has never yet accomplished… Finish better than third in a division. 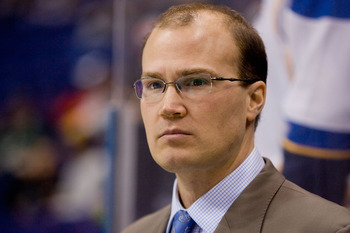 The organization has established its commitment to succeed with the lucrative signing to former-Montreal Canadian Jaroslav Halak.

Payne has shown the leadership the Blues need, now it is a matter of playing the right hand throughout the entire 82 games.

While the record shows that Crawford ranks 13th all-time in wins (507), the recent success has been minimal.

Over the past four seasons Crawford has failed to steer his team into post-season contention.

The only saving grace Crawford has is a resume filled with eight playoff appearances and a 1995-96 Stanley Cup Championship with the Colorado Avalanche.

Crawford will be another that may be on a seat that could force him not only out of the Stars’ organization, but possibly out of the NHL.

While the seventh coach in franchise history, Carlyle has brought consistent success to the Ducks.  Four out of the last five seasons the Ducks have managed to make the playoffs.

Clearly the high water mark has been the 2006-07 Championship.

Carlyle will look to turn around last seasons mediocrity in hopes to make the post-season once again. 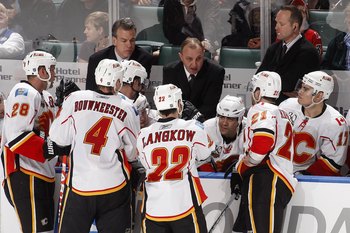 Through relentless criticism, he would join his brother, Darryl, in Calgary where he would miss the playoffs for the first time.

Regardless of the Flames under-achievements, Sutter brings a winning mentality.

Other than success in the NHL, Sutter has also coached Team Canada to two consecutive gold medals at the IIHF World Junior Championships.

While the failures from last season weigh heavily on skeptics, Sutter will need to establish better use of his play-makers such as Jarome Iginla.

After a lack luster 2008-09 season, the Avalanche fired then-head coach, Tony Granato.  Joe Sacco would serve to become the next man to take a shot at returning the Avs back to the playoffs.

After surprisingly finishing second in the Northwest Division, the Avs did just that.

With Sacco now going into his second year and being more familiar with the NHL coaching role, look for the Avalanche to contend for another playoff spot in 2010-11.

A franchise coach and face of the Predators, Trotz is known for discipline and focus.  Even though he has accumulated over 400 wins, he has only made five playoff appearances during those 11 seasons.

Maybe change is what is needed to get them to that next step?  The pressure has got to be on this season.

With the resurgence of the division dwelling Kings, Murray has brought optimism back to the L.A. area.  After finishing third in the Pacific Division with a very respectable 46-27-9 record, LA made it back to unfamiliar ground… the playoffs.

Murray has endured nine career playoff appearances and if he should return this year it will be through hard work and discipline.

Murray clearly has the talent on his side, it is now the time to step up and position Los Angeles in a way he did Philadelphia in 1996-97.  While the Kings don’t quite seem to be at that level yet, don’t be surprised if they establish themselves early this year as a top four team out West.

Perhaps the biggest jaw-dropping turn-a-round performance was that of the Phoenix Coyotes.  Facing bankruptcy the talent on the team wasn’t filled with names like a Crosby, Heatley, or Ovechkin.

After a pathetic season of only 36 wins in 2008-09, Tippett would lead the Coyotes to their first ever 50 win season and a fourth-seed in the playoffs.  He would go on to win the Jack Adams Award for having contributed the most to his team’s success.

Tippett over time has never finished worse than third in the Pacific division with Dallas and Phoenix.  During that time period (2002-2010) his team has failed to make the playoffs only once.

With a proven winning record in Vancouver, Vigneault has solidified the Canucks amongst the leagues elite.  After a mediocre 2007-08 season he almost found himself outed as head coach in Vancouver.

While rebounding the way that was expected the Canucks have been on the wrong side of the second-round playoff series three out of the last four years.

With the bolstering of team defense, look to see a pass or fail mentality from not only the fan base, but from the head office as well.  Anything but at least a conference finals appearance will find Vigneault jobless next off-season.

There is zero doubt that McLellan can coach.  San Jose has been a beast in the regular season over the past two seasons under McLellan.

Unfortunately the same can’t be said during the playoffs.  As an ongoing trend  seems to continue, this season the Sharks will begin the year with a new face between the pipes.

The questions aren’t being asked whether or not the Sharks can win, it is can they contend.  When faced with adversity the Sharks have crumbled.  While a coach takes blame for not being prepared it can be just as much in the hands of the players.

After making it to the Western Conference Finals, look for the Sharks to rebound from a sweep at the hands of the Chicago Blackhawks.

After reaching the peak of success in the 2009-10 season, many now ask where you go from here?

Quenneville is accustomed to winning seeing as he has only missed out of two playoffs throughout the 13 seasons and head coach in the NHL.

“Coach Q” currently sits ranked 11th all-time in the win category, after constructing 40 win seasons in 9 of his 10 full season as head coach.

Regardless of salary cap woes, he could perhaps be the best coach in the league at getting the most from lesser names.  While many make fun of the line juggling spectacles, Quenneville is an orchestrator at getting the match-ups he wants night-in, night-out. 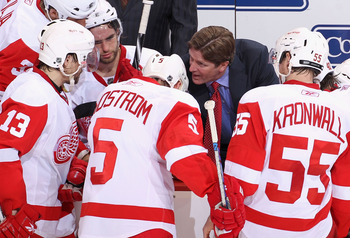 While people think of coaches many think of Mike Babcock.

Apart from leading Detroit to four straight division titles, two conference championships, and a Stanley Cup, who could ask for more.

Decimated at times by injuries last season, Babcock did what very few coaches could manage to do.  Seemingly playing with a makeshift lineup of AHL players, the Red Wings marched to a fifth seed in the 2009-10 playoffs where the would get knocked out in the second round by the San Jose Sharks.

Now in a division where head-dog isn’t so clear anymore, Babcock will face more challenges whether healthy or not.  Regardless, Detroit should contend once again as league supreme and try to wrestle away the division crown from its rival, the Chicago Blackhawks.