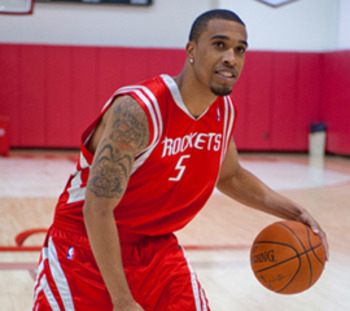 KC Johnson at ChicagoBreakingSports.com has a nice little nugget for us in terms of a solution for our SG woes on the season.  Apparently, the Bulls are very interested in WKU product Courtney Lee, who is currently a member of the Houston Rockets.

The Tribune had reported previously that Lee is a favorite of the coaching staff and that the Bulls have scouted him extensively. General manager Gar Forman saw Lee in person during the Rockets-Lakers game in Los Angeles on Feb. 1.

That said, management is very high on Asik, who helped turn the momentum of Wednesday’s victory against the Jazz in Utah. After the Bulls failed to grab an offensive rebound during the entire first half, Asik brought energy in the third quarter and finished with a game-high seven rebounds in just 15 minutes.

Coach Tom Thibodeau praised Asik after the game, and management has given no indications it plans to trade him.

I am thrilled with the idea that the Bulls are actively looking to improve the 2 position.  However, one seriously has to ask how many more wins (if any) we gain with adding Lee and subtracting Asik.  Personally, I believe Asik is over-rated, but I’m not sure Lee helps us in meaningful ways in the post-season over what we already have in place.

Now, if this trade was say, Bogans and a 2nd round pick for Lee, I would not be able to accept fast enough.  But big men that hustle don’t come around all the time.  For now, I say hold on to Omer, but don’t take him off the market.  Lee would no doubt become the best #2 on our team instantly, but I’m just not sure it is worth that cost at the moment, especially with a front court known for their injury problems.