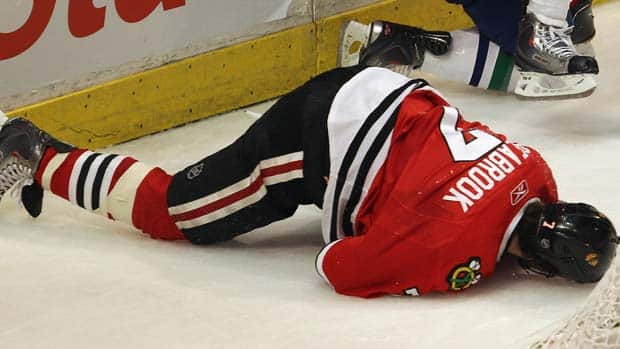 The NHL’s regular season was plagued with concussions and a multitude of headshots that were so frequent that it caused Commissioner Gary Bettman to make them a major talking point at the GMs meetings in Florida in March. Those meetings evolved into adding Bettman’s 5-Point Plan to Rule 48 which was just introduced to the NHL rule book in October of 2010.
What does it say of a rule that was invoked less than six months ago if it requires another look by the GMs at the spring meetings? The GMs decided that tighter enforcement was necessary for charging and boarding as well as longer suspensions for repeat offenders. I have written a few pieces on the subject here and here that serve quite appropriately as back stories on the almost chronic nature of this issue in the NHL this season.

Meanwhile, this clouded issue continues to plaque the NHL in the playoffs. We have seen some seven headshots thus far even while Round 1 is still being contested in both conferences. Once again, the same questions are popping up; Was there intent? What was the resulting injury? What constitutes a hearing? What is the rubric for game suspensions or fines? What does it mean for repeat offenders? What is the definition of a repeat offender?

While the League has few clear cut answers to any of these questions, their inconsistency as far as implementation in the regular season is, without a doubt, spilling over into the playoffs. This has put an exceedingly amount of pressure on the NHL’s Senior VP and Director of Hockey Operations, Colin Campbell, who was recently quoted as referring to his job of NHL sheriff as “thankless.”

Campbell, whose son Gregory is also in the NHL playoffs as a forward for the Boston Bruins, was also quoted as saying, “especially at this time of year when there’s so much at play here with the playoffs and cities are involved. When you rule on certain situations, all of a sudden you become public enemy No. 1 so … Am I pissed off right now? Yeah, I’m pissed off.”
The above quote came in reference to the backlash from Campbell’s lack of action on the hit that the Canucks Raffi Torres took on Chicago’s Brent Seabrook in Game 3 of their match up, here. Very few people expected Torres to get off with just the two-minute minor, yet that was exactly what happened. The outcry from the hockey community was so great that it required the NHL to issue a statement explaining the rationale for not suspending Torres, who had just come off of suspension for an almost identical hit.

Interestingly enough, many are attributing the Chicago Blackhawks resurgence after being down 0-3 games to the Vancouver Canucks as being motivated specifically by the NHL’s lack of action on this hit. Yet, Campbell is taking his lumps from other head shot calls as well by those on either side of the fence, his lack of professionalism aside.

Game 1 of the LA Kings/San Jose Sharks match up saw a one-game suspension give to Jarrett Stoll for this hit on Ian White. The same one-gamers were susequently given to Tampa Bay’s Steve Downie for his hit on the Pens’ Ben Lovejoy; Pittsburgh’s Chris Kunitz hit on Tampa Bay’s Simon Gagne and Anaheim’s Jarkko Ruutu’s hit on Nashville’s Martin Erat.
Yet the Flyers’ Mike Richards’ hit on Buffalo’s Tim Connolly, which has Connolly out indefinitely, received no supplemental punishment beyond the two minute minor that was assessed at the time of the hit. Detroit’s Johan Franzen was hit by Phoenix’s Shane Doan, which required some 20 stitches, wasn’t even given an on-ice penalty.

It is safe to say that the NHL has two sets of standards when addressing head shots and Rule 48 during regular season play and the play offs. In a recent article, San Francisco Chronicle sports writer Jack Leonard cited that, “The 21 suspensions for head shots during the regular season were for an average of about five games, and each of the six non-egregious cases resulted in two games. None was for one game.”

Understandably, losing a player to a suspension in the playoffs for one game could be seen as having more of an impact than a three or five game suspension in the regular season, yet Bettman’s battle cry from the beginning was that of player safety being paramount. Does that concern wither away due to the heightened intensity and urgency of the playoffs?

His 5-Point Plan is a start, yet is appearing to be more of a stopgap than anything else. While the idea of making players go to a quiet room to be evaluated is a solid move, the NHL needs to be proactive instead of reactive when dealing with injuries that could be career-ending or worse.

If Rule 48 is going to be effective, there need to be much clearer and more finite parameters put in place, otherwise the NHL is simply putting lipstick on a pig. This isn’t a court of law; we can’t prove intent so using it as a yardstick seems futile (Chara’s hit on Pacioretty?). Basing the consequences on the result/injury incurred does no good either because then we will have a bunch of actors on the ice, not hockey players.

When Detroit’s Todd Bertuzzi came off his skates and elbowed Chicago’s Ryan Johnson last month, it almost seemed as if, due to the fact that Bertuzzi apologized immediately to Johnson and claimed that it was an accident, there was no follow up by the NHL, not even a hearing for appeasement. Is being emotionally apologetic also hidden in the rule book somewhere as well?
The point being, we are no better off today than we were a year ago regarding head shots. This is due primarily to the fact that the rules are too loosely written, include subjectivity that cannot be parsed and ultimately, the players are possibly in a much more dangerous position due to the NHL’s inability or unwillingness to tighten up the rule book for fear of taking way from the speed and excitement of the game.