One bright spot to a disappointing  2011 season is the Cubs will have the 6th overall pick in the 2012 player draft. There is a good and bad to drafting this high. The good: the Cubs could get a solid player for the future. The bad: the 2011 season did not go as plan and a big fail.

The 2012 draft order became official yesterday. The Cubs had the same record as the Padres and Royals. To figure out which team goes where, it goes by how hard the teams schedule was. So…knowing that, the Royals will pick 5th, the Cubs will pick 6th and the Padres will pick 7th.

It’s pretty sweet that the Cubs will pick this high in the draft, but they can’t be cheap and waste the 6th overall pick. If the 2011 draft shows any signs, the Cubs will not waste this great opportunity. As the Cubs spent and spent and Tim Wilken, most can say, might of had his best draft. But the question still stands; “will Tim Wilken be back to draft the players in next year’s draft?” Tom Ricketts and Tim Wilken did meet a few weeks back about going forward and was said an extension for Wilken will be up to the new GM of whomever it will be.

Unlike when Mr. Rickett sign player personnel Oneri Fleita to a 4 year extension. Tom Rickett might have waited to sign Fleita to an extension and gave the new GM the decision to sign him, if teams weren’t hard after him. The team who had the most interest in Fleita was the Detroit Tigers and were planning an offer for him.

Of whoever the GM is, Wilken should be back and given a new contract. When he’s able to spend, Wilken is a draft winner.

If the right player is there at #6 and not considered a reach, the Cubs have to look at a starting pitcher. The Cubs farm system, for the most part, has no SP and mostly all the pitchers who are putting up good stats are RP. The Cubs may have SP in the 2011 draft, but too early to tell. That’s just my opinion on where I think the Cubs should look.

Players the Cubs could look with the 6th overall pick are…

The draft is still far away, so players rankings are subject to change. These players will either go up or down and more players will be mentioned of whom the Cubs may draft.

As you can see, the Cubs have not have great success in the draft. But all can change with one player. Hopefully the Cubs 1st round pick in next year’s draft will not have ‘bust’ in parentheses. 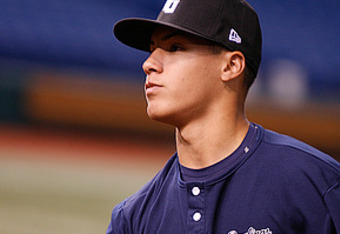