With the sounds of the GM position winding down, the questions begin of who the Cubs could go after or who the Cubs should go after. The first big name we have heard is Rangers’ CJ Wilson, who will be a free agent this upcoming winter. Wilson is slated to be the top free agent pitcher and is expected to be paid. As teams need starting pitching and there’s no one out there via free agency. There is the trade route teams will go and I expect most to do so. But will the Cubs/Mr. Ricketts shell out money for a pitcher who hasn’t been a starter for long. Wilson has only been a starter since last year. Before that he was manly a relief pitcher and has pitched 708 innings in his career. The 30 year old pitcher has had numbers thrown around of what his new contract could look like; the contract being thrown around that he will get is 5 years at 100 million.

CJ Wilson hasn’t exactly ruled out playing for the Cubs this winter, but again really hasn’t thought about it as he wants to win a world series. That’s more important for now and if he pitches good to the end, his stock may even go higher. However, time will only tell for now. Wilson has been asked about the Cubs and said he has never been to Wrigley before. Man, Wilson you are missing a ton!

Should the Cubs go after him? Yes, but I don’t think it’ll be worth that kind of money. The trade route looks better and there will be good pitchers available that way. The 2nd best tier starting pitcher this winter is Edwin Jackson, currently on the St. Louis Cardinals. Jackson won’t command that much, but will be overpaid because of the short hand of SP. I would rather the Cubs sign Jackson to a cheaper contract and sign other needs via FA or trade for a SP and spend more money in FA on other needs, aka 1B.

Wilson would join a rotation of Garza, Dempster (if he picks up his player option, which seems very likely), Wells and Cashner. That would be the 5 right there and it doesn’t look too bad. I didn’t put Zambrano because of all the reports sayin’ he will be gone and I think he will too.

Maybe Wilson will be the first big move under the new GM. But I think signing Fielder will be more important and going out trading for a SP. I just don’t have too much faith Wilson will put up the same stats and that the Cubs will be regretting another 100 million contract. I can see that happening.

Both Jackson and Wilson probably have not thought about this upcoming winter because both are still pitching for their teams. The Rangers are playing the Tigers and the Cardinals are playing the Brewers in trying to advance to the world series.

Thanks to the Chicago Sun-Times and the Dallas News for info and the thought of this article. 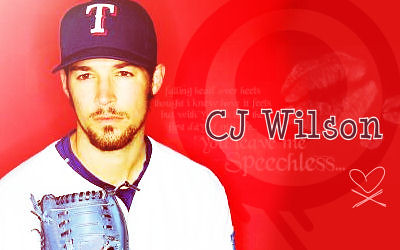