Illinois football is in uncharted waters right now. The team is coming off back to back bowl victories for the first time in team history, and has a new coaching staff coming in. In past coaching changes, the previous coach has usually left the incoming coach with a bare cupboard. That is not the case this time around. Ron Zook didn’t do many things well, but one thing he did do well was recruit. New coach Tim Beckman has a pretty impressive stable to work with. 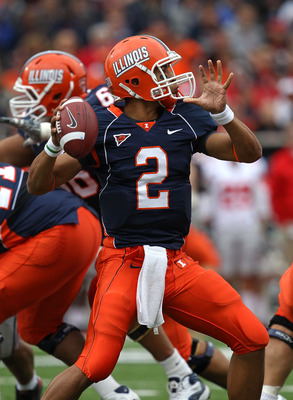 -The offensive line, which gave up 36 sacks, was one of the biggest weaknesses on the team last season. Pocic looks like an All-Big Ten player in the middle at center, but one man can’t do it all. Senior Hugh Thornton looks to be a returning starter at guard this year, along with sophomore Michael Heitz at tackle. The other guard and tackle position are up for grabs though. Redshirt freshman Ted Karras could plug himself into the other guard spot while Simon Cvijanovic or another youngster like Pat Flavin could take the other tackle spot.

-Wide receiver was a strange spot last year for the Illini. AJ Jenkins had an All-Big Ten year racking up 1276 yards, 8 touchdowns and snagging 90 balls. Take him away and they really had nothing else. Returning starter Darius Millines looked just as good as Jenkins through the first two games having 157 yards, 8 catches and 1 touchdown, but an injury riddled him the rest of the year and he only caught 11 more passes. Junior Spencer Harris caught 26 passes last year and looks be the other starter barring someone surprising in Fall camp.

-Tight end is an incredibly deep position for the Illini for this fall. Junior Evan Wilson and sophomore Jon Davis are the best TE duo in the Big Ten in my opinion. Senior Eddie Viliunas is a very good blocker on the line and junior Justin Lattimore is another athletic option in the passing game. Matt LaCosse only caught one pass last year, but at 6’6″ 240 the athletic sophomore will be another target for the quarterbacks this fall. That gives the Illini five legitimate targets at the tight end position, which needs to step up big due to a weaker WR corp.

-The most interesting position in my opinion for this fall is running back. Illinois loses Jason Ford and Troy Pollard off last years team, who accounted for a combined 1075 yards and 9 touchdowns. But don’t fret Illini fans, we seem to have a thunder and lightning duo in Donovonn Young and Josh Ferguson. Young rushed for 451 yards on 87 carries as a true freshman, while also scoring 6 touchdowns. He had a bit of a fumbling problem, along with some injuries, but he did average 5.1 YPC. Josh Ferguson played sparingly as a true freshman until a hamstring injury ended his season. He was granted a medical redshirt and will be a redshirt freshman this fall. Ferguson opened eyes in a huge way this spring, rushing for 148 yards on 20 carries in the annual Blue vs. Orange spring game, and also being awarded the Most Improved Offensive Player. The speedster from Joliet Catholic could very well end up the #1 back in Fall, but those two will play a huge role in the offense.

-Every year the most popular player on the team seems to be the backup QB. Last year was more of the same with fans clamoring for freshman Reilly O’Toole to get more snaps and to get some starts. Well O’Toole did get some snaps, and he did ok for a true freshman in the Big Ten. O’Toole ended with just one touchdown to four interceptions, and a 59.7 completion pct. The number one guy Nathan Scheelhaase improved in every statistical category from his freshman year except for touchdowns (down four from 17 to 13), and sacks, though you can’t really blame him for those. Late in the year it looked like Scheelhaase was running for his life because the line seemed to get worse and worse as the year went on.

Tune in next week for the Defense and Special Teams season preview!