“On what he will take away from playing a couple of series in this game
“‘My wind, tackling. Tackling is always a big deal the first game. Guys are sometimes overrunning the ball because it’s live [for the first time]. That’s the thing you want to work on right now, live tackling, because we’re missing a lot of tackles.’”

Tackling tends to be an overlooked skill for most of us.Until it all turns bad during the season and its to late to do anything about it.   I can’t recall a single media reference to how well the Bears tackled Thurday night, which is a good indicator of how they did.  Now is the time to practice the fundamentals and get them down.

“Nickel of time: D.J. Moore seemed rather bold the other day when he said no one could challenge him for his spot at nickel back. Moore went out and backed up his words immediately Thursday night.”

Moore tipped the ball that was intercepted by Major Wright Thursday night.

“2. Why are NFL teams so afraid to show ‘too much too soon’? How good is a game plan, a scheme or a play if the element of surprise is so critical to its success? Is it that hard to devise enough plays and wrinkles that opponents won’t know what to expect?”

I know they want to keep things conservative in terms of play calling.  But come on.  How can you evaluate players if you don’t let them play?

You don’t have to call a bunch of fancy blitzes but would a few deep passes and some press coverage have really hurt all that much?

“McClellin will fit in well because he gives the defense something it didn’t have. He will get steamrolled at times like he did Thursday, but he will put a lot of offensive players on the ground and disrupt a lot of plays.”

The offensive linemen that McClellin saw in the first half did, indeed, steam roll him any time there was a run to his side.  For those looking for more encouraging signs, however, McClellin showed promise as a pass rusher and to my eye he played the run much better in the second half.

“‘He’s a left end, not a right end,’ the scout said of McClellin. ‘To me, he is really truly a better fit as a 3-4 sam (strong-side) linebacker. You’re never going to see him be special off the edge. He’ll be a pain in your ass and he’s strong but that’s my opinion.’

“Too many people have wondered about the possibility McClellin could one day move to middle linebacker, so I bounced that scenario off the scout. He scoffed at the notion, pointing out the athleticism of Brian Urlacher far exceeds McClellin.

“‘If you’re talking inside, I could see him as a two-down inside linebacker in a 3-4,’ the scout said. ‘But in a 4-3 defense? No, that is not the answer for this kid. The Bears will play him at end and he’s going to be a high-motor player for them.’”

“Alshon Jeffery is not agile enough to beat press coverage at the line of scrimmage and ‘needs to develop into one of those Keyshawn Johnson-type guys that is physical.’”

“The fourth quarterback (Matt Blanchard) didn’t look too bad until he started looking at receivers instead of reading coverage.”

“The tight end (Kellen Davis) is just Average Joe and the guys behind him are really Average Joes.”

‘‘’Matt has that knack,’ said Mike DiMatteo, his coach at Lake Zurich from 2003-05, ‘it’s something you can’t put your finger on. But he’s one of those guys with that knack [for winning]. He’s absolutely fearless. He’s not afraid of a challenge. And he’s a tough kid. It’s pretty ­impressive.’’’

‘‘’To walk into a stadium [Thursday night] that was holding more people than he’s ­probably ever been in front of in his life,’’ [Bears general manager Phil] Emery said, ‘to throw that long ball and be accurate in the short area and to carry himself with poise under duress in a very charged environment says everything about him.’’’

“The Bears re-signed Tim Jennings this offseason before going to the free-agent well to add competition for him at left corner. Early signals from training camp indicate that Jennings still has a fairly secure lead in the position battle, though. Former Colt and Falcon Kelvin Hayden, the top competitor for Jennings’ job, has not stood out as much as Jennings in practice, we hear, and Hayden is the third corner on the depth chart at this point.” 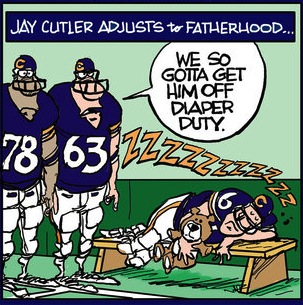 There’s no mystery as to why Benson has had a tough time finding a team. He runs really hard but he not only isn’t a good receiver out of the backfield, he doesn’t even try. And he’s not a good blocker.

No one asked him to do any of that when he was at Texas. Now that he’s with the big boys he can’t find anyone who isn’t asking him to do it.

Frankly, as desperate as they are for help at running back, I’m surprised Green Bay is interested. My first thought was that this rumor was actually planted by the agent just to generate some interest.

“We hear it’s still unclear how a fullback will be used in the Patriots’ offense, but it did seem to be one of the team’s focal points this offseason after adding Spencer Larsen and Tony Fiammetta. The Pats placed Fiammetta on the exempt-left squad list, leaving Larsen as the one to make the team as a No. 1 fullback. Josh McDaniels had Heath Evans as a fullback in New England during his first stint as the team’s offensive coordinator, and Larsen was with him in Denver. The Pats have used extra linemen and versatile players in the past as lead blockers, but getting more efficiency from that spot with a prototypical fullback like Larsen is still an option — late last season New England brought FB Lousaka Polite aboard.”

“Johnson and his wife went to a restaurant for dinner. They returned home and she found a receipt for a box of condoms, [Davie Police Department Capt. Dale] Engle said.

“’It gets pretty heated,’ Engle said. ‘By the time they get home here in Davie it’s pretty heated. She alleges he leaned over and head butted her. He says she leaned towards him and that they butted heads. Needless to say she has a good laceration on her forehead.’”

The toughest teachers I’ve ever had were the ones I learned the most from and often (though not always) were the ones I ended up liking the best.  So I thought this quote from former Bear defensive end Alex Brown was of interest.  Via Biggs:

“[Former defensive coordinator Greg] Blache let you know what your job was and when you didn’t do your job, he let you know. I am saying it in the nicest way possible, OK? He said it in a pretty mean way. As a grown man, you didn’t think you’d be talked to like that, you know? He was different and I wouldn’t change it for anything because it made me tougher as a person. As a player, it gave me that thick skin that I needed to play in the NFL. I enjoyed it. I loved him. I really, really appreciate him. It was great.”