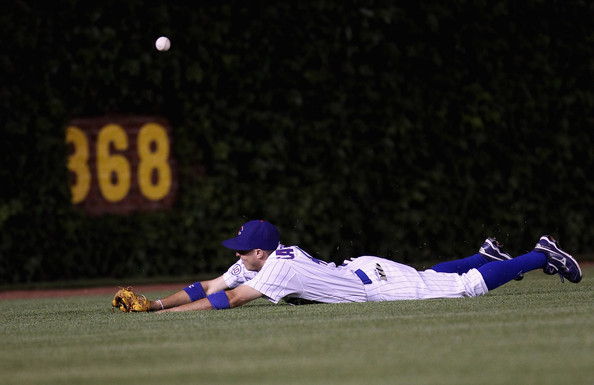 The original article appeared on World Series Dreaming and can be found here.

Just about every media outlet that matters, including Carrie Muskat, has reported that Tony Campana has been designated for assignment to make room for Scott Hairston.  The Cubs 40-man roster is now full up again, but just replace Campana’s name with Hairston’s.  At this point the Cubs have 10 days to waive, trade or release Campana.  But I think there’s a good chance that our favorite shitty Cub will remain in Cubbie pinstripes in Iowa.

Tony will now be exposed to waivers and those are not revocable as far as I can tell.  That means some other team could claim him.  But in order to do so, a team has to have an open spot on their own 40-man roster.  The Cub Reporter’s very well-documented table says that Tony has options left and will be assigned to Iowa if he clears waivers.  The way waivers work is that the crappiest team in the Cubs’ league (that’s the National League) gets to claim first, and then the next crappiest team gets to pick if the first team passes, and so on.  As of today, based on MLB.com’s official rosters and no other updates to state the contrary, there are four possible teams that could claim Campana.

In order of shittiness:

The Cardinals, as lords of black magic, have an uncanny ability to turn other teams’ castoffs into superstars.  At least it seems that way.  But Ryan Theriot was still terrible so don’t feel so bad (he’s just a lucky SOB).  Anyway, their roster is currently full but Chris Carpenter (the good one) has a potential season-ending injury and that means if the Cardinals decide to try to DL him, they will be at 39 and will thus have a spot open to claim Campana.  It’s highly unlikely that Tony Campana becomes the second coming of Lou Brock, but it’d be kind of amusing to watch that many heads explode.

The Braves actually have only 37 spots filled on their 40 man roster, which means they are the most likely team to take a flyer on Campana and just send him to the minors afterwards.  They already have the Super Upton Brothers and Jason Heyward in their outfield so they don’t actually need Campana for anything except to warm the bench.  The question is whether they’ll bother, but with three open spots, why not?

Technically the Giants have 39 spots on their roster, but the one guy who was on their restricted list, Angel Villalona, was invited back to camp and it seems likely that the Giants would just put him back on the roster.  Being that he’s much more highly regarded than Tony Campana, we can perhaps scratch the Giants off the list of destinations.

The NL’s best team last year, the Nats are the last obstacle against Tony Campana leaving the Cubs organization.  They have exactly one spot open and it is entirely possible that since they are built to win now, they could use that magical 25th man to pinch-run.

Huzzah!  Every roster in the AL is full, so Tony will remain in the NL one way or the other unless some weird stuff happens between now and when position players report.

Depending on how the Braves feel, I think there’s about a 50-50 chance Tony Campana becomes a Brave.  If so, it’s been fun, Tony C.  Best of luck to you as you learn how to bunt so you can actually use that speed of yours on the bases.

But if Atlanta passes I imagine there’s a very good chance that Tony goes to Iowa, and we’ll get to check out his progress every now and then.  So don’t say goodbye just yet.