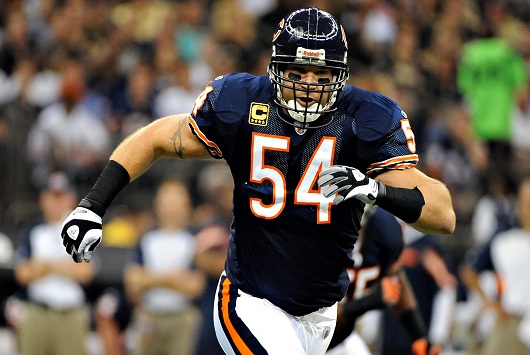 After thirteen seasons in the NFL Brian Urlacher has announced his retirement. Via Twitter he said “It was an honor to play my entire career for the Chicago Bears. For over a decade Urlacher was the cornerstone of the Bears defense. Accounting for over 1000 tackles, 22 interceptions, and 41 sacks he will certainly be remembered with the old time greats like Butkus and Singletary  as one of the best linebackers the Bears have ever had.

Drafted ninth in the first round of the 2000 draft he was an immediate game changer and kept up that same level of play for most of his long career. Urlacher and the Bears parted ways earlier in the off season over a contract dispute and it was an unfortunate situation for Urlacher as well as the team. Now, as the Bears start this next phase with new coach Marc Trestman at the helm they certainly have a big hole to fill in their secondary. But now we say goodnight, sweet prince; see you in the Hall of Fame.