Improvement is needed by the Chicago Bulls to do well in the playoffs. A return to the NBA playoffs for the Chicago Bulls after a five-year absence is all but guaranteed. However, the locker room atmosphere is anything but cheerful. While the Bulls were routinely winning, Donovan was concerned about their defensive mistakes, unsustainable high-shooting accuracy from behind the arc, and rookie players pressed into starting roles. Even though Donovan is not surprised by the team’s unanticipated decline, he also does not believe that it is the end of the story for them.

One of the biggest problems, according to Donovan, is the inconsistency of young players like Ayo Dosunmu and Patrick Williams, who are just getting their feet wet in late-season competition. Nevertheless, the Bulls have a tendency to allow opponents to run away from them when they put pressure on them, thereby giving you the pleasure of seeing the Bulls in the playoffs may give you the idea of playing them. 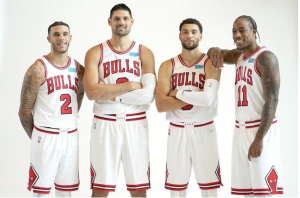 In the NBA, the Chicago Bulls are an average defensive club. In terms of opponent points per game allowed, they are ranked 15th, which is exactly average. This season, they have allowed 110.9 points per game, sliding out of the top ten from earlier in the season. Bulls fans will make injury the scapegoat for the team’s demise. Their defense has suffered due to the absence of Patrick Williams, Alex Caruso, and Lonzo Ball for the majority of the season. On defense, the Bulls must take up the slack. In the most natural scenario, the Bulls turn to Zach LaVine, arguably their most athletic player, to help out on defense. This past summer, LaVine was a member of the Olympic squad that won gold. Bulls fans will make injury the scapegoat for the team’s demise. LaVine’s defensive IQ beneath the rim has been lacking. His athleticism and physicality are among the finest on the squad, but to actually have an impact, he needs to see plays before they happen.

The simplest method to improve their offensive woes is to increase the role players’ involvement without jeopardizing the defense. Donovan’s ingenuity will be required, but it is not an insurmountable challenge. The Bulls’ next few games will be crucial in regaining their attacking rhythm. Throughout their late-season slide, Chicago has experimented with different lineups, minute distribution, and overall roles. Coach Billy Donovan has gone so far as to eliminate certain role players’ playing time entirely. However, it’s possible that this is where the most significant change is required. While the move may have seemed logical at the time, there are a few role players that should be reintroduced into the rotation come postseason time to help the club rediscover itself. Donovan will have to force an effort from Bradley in order to get at least 10 good minutes from him and keep the Bucks off the scoreboard. By no means should the bulls expect to score. They should approach him with the mindset that he’s only there to rebound and disrupt shots; anything else is a bonus. Coby White, Ayo Dosunmu, and Alex Caruso, the Bulls’ role guards now in the rotation, should be ready to step up and create offense.

It had been a long-held goal of the Bulls to make the playoffs, and they finally achieved it this season. All that’s left are a few tweaks here and there, as well as fewer injuries to key players.