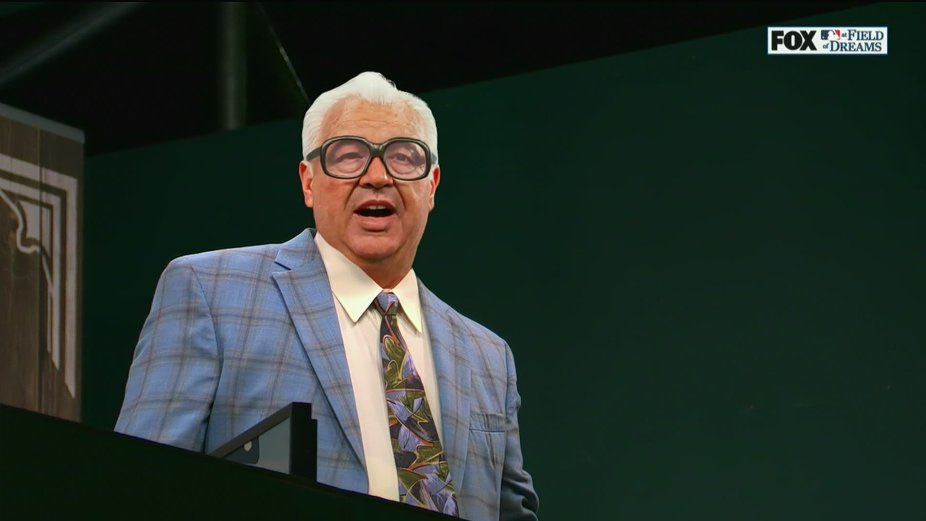 Fans share their thoughts on the Harry Caray hologram at the Field of Dream’s Game.

MLB’s Field of Dreams Game took place on Thursday night. The Chicago Cubs were able to take down the Cincinnati Reds 4-2. The Cubs quickly took the lead with a 3-run first inning and never relinquished it. Drew Smyly pitched 5 scoreless innings with 9 strikeouts in a solid team victory for the Cubs.

Nothing got people talking more than the hologram of the late Harry Caray. The questionable hologram sang the 7th inning stretch at the game and was displayed on FOX’s national broadcast.

An all-time “Take Me Out to the Ballgame” only possible through the magic of Field of Dreams 🙏 pic.twitter.com/IC8yHrFZQT

Cubs fans have become reaccustomed to Harry Caray singing the stretch. His renditions are often shown on Wrigley Field’s video board which was installed in 2015. The people behind this hologram’s performance probably should’ve just taken some notes from the folks over at Wrigley. Naturally, fans took to Twitter to share their thoughts on the Hologram Harry.

Yo, that Harry Caray hologram was not it. Who cleared that? #Cubs #FieldofDreams

It’s the thought that counts, right? The concept of a Harry Caray hologram probably sounded great on paper. When it came to the execution, a lot of fans didn’t care for it.

FOX SHOULD BE IN PRISON FOR DOING HARRY CARAY LIKE THIS pic.twitter.com/5DfNAZ4QIY

Harry should at least have his shirt off vibing with a Budweiser if he’s gonna look that bad. Yikes.

Was Will Ferrell busy? There must’ve been better ways to incorporate a Harry Caray tribute without this level of creepiness.

On a night that was in part meant to celebrate the legends of baseball, FOX incorporating Harry into their broadcast was a great gesture. Whether or not using an augmented reality hologram was the right way to do it remains up for debate