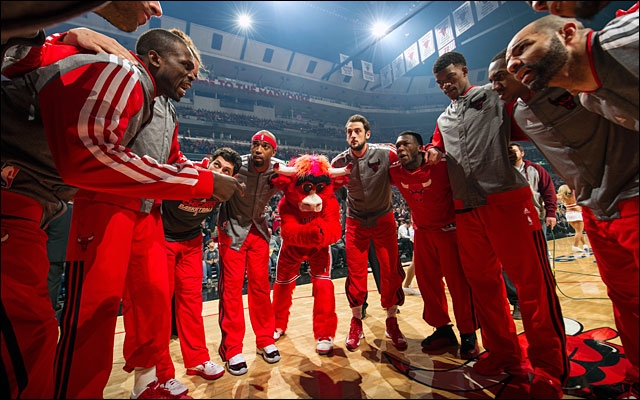 It’s not the starting lineup Bulls fans expected to see come playoff time. But in reality, the Chicago Bulls have to deal with it and hope for the best.

The  Bulls head into their opening round playoff series against the Brooklyn Nets a little banged up. Derrick Rose still hasn’t returned from his ACL injury in Game one of last seasons opening round. To make matters worse, the Bulls could be without starting center Joakim Noah for the first round.

That’s a lot of weight to put on a coaches shoulders , but the weight gets heavier.

It was reported earlier on Friday that Noah would likely miss game one of the series, and possibly more. He is dealing with plantar fasciitis and what is believed to be a tear in his foot.

Taj Gibson returned after missing seven of the last eight regular season games with a knee injury, and is wearing a brace to help ease some pain. Richard Hamilton also returned later in the season after missing several games due to an injury.

Yet, the Bulls are still here. They made it.

An impressive thought considering they have been without former MVP Rose for a whole season, and have seen over 10 different starting lineup combinations this season.They have also seen players like Jimmy Butler, Nate Robinson, Kirk Hinrich and even Nazr Mohammed provide valuable minutes when needed.

Speaking of Butler, the rising guard from Marquette get’s his first playoff start of his career Saturday in Brooklyn. Coach Tom Thibodeau announced the move on Friday, hoping Butler can give the Bulls a much needed spark as they enter the series with a lot of questions.

As for replacing Noah? That job is up to center Nazr Mohammed who will take on the role of guarding Nets All-Star center Brook Lopez. Mohammed trying to stop Lopez will certainly be something to look forward too. Mohammed gives up  scoring ability on the offensive side, but could provide valuable minutes on the defensive side of the ball for the Bulls.

The Bulls took the season series from the Brooklyn Nets 3-1, but lost on their last trip to Brooklyn 93-89 in a game that was very winnable.

But that’s the regular season, it’s a completely different game in the playoffs. The Bulls must be on their game as they need to take at least one of these first two games in Brooklyn before the series heads to Chicago.

The Nets have received a late spark from Deron Williams who has looked the explosive point guard back in his Utah Jazz days. Giving the Nets offense a look many fans thought they would see entering this season.

Keys to the game

For the Bulls it comes down to point guard play. Kirk Hinrich will get the start and will have the duty of shutting down Deron Williams. This becomes huge in the fourth quarter, where the Nets will look to Williams to take over.

The Bulls are fortunate enough to have two solid point guards at their disposal this season. Robinson brings energy off the bench for the Bulls and gives them a legit scoring threat.

If the Bulls can win the point guard battles throughout the night, they will have a great chance at taking game one of the series.

While Williams might be the star for the Nets, this game (and even series) could fall on the shoulders of Joe Johnson.

Johnson got a large contract from the Nets in the off season, and so far hasn’t been as good as advertised. Johnson can score in bunches, which could be a deciding factor for the Nets. Especially if he gets going early.

The Bulls will counter with Jimmy Butler who provides a defensive presence on the floor. Butler’s defensive ability could be a problem for Johnson and the Nets, which could mean trouble.