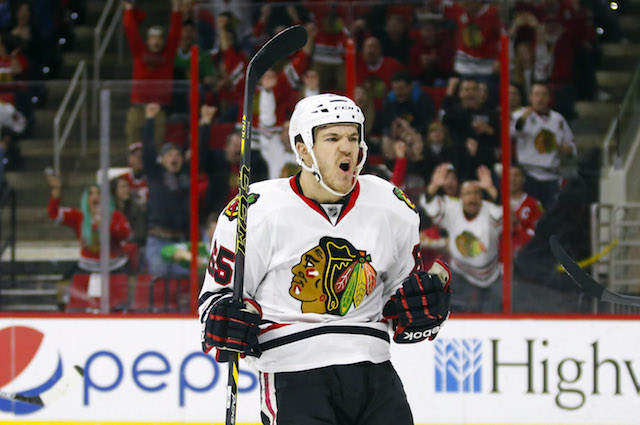 Gritty. Scrappy. Tenacious. Hard-nosed. Chirper. Mutt. These are just a few of the characteristics that described the 5-foot-1, 182-pound Andrew Shaw, who was never afraid to play the game bigger and harder than his frame. After 10 seasons in the NHL, the 29-year-old officially announced his retirement this morning, citing a series of concussions as a main factor in his decision.

A twice passed-over player in the NHL Draft, Shaw finally got his chance in 2011, when he was selected by the Blackhawks in the 5th round. After breaking into the lineup that January, Shaw played 37 games his rookie season, tallying a respectable 12 goals and 11 assists (23 points) while cementing himself as a regular in Coach Joel Quenneville’s lineup.

It feels like Andrew Shaw has been a Blackhawk for an eternity, but in reality, the fan-favorite only played 6+ seasons for Chicago. His time was short but his impact was astronomical, culminating in two Stanley Cup victories in 2013 and 2015. Shaw was not just a bit player in those Cup runs either. In both 2013 and 2015, Shaw registered 9 points (5G, 4A) and 12 points (5G, 7A) in the playoffs, respectively; including the game-winning, triple-overtime goal in Game 1 of the 2013 Stanley Cup Finals against the Boston Bruins. He was always a fixture on the Blackhawks’ power play to boot, serving as the team’s best net-front presence.

“No two moments sum up Andrew Shaw more than his famous ‘headbutt no-goal’ and his game-winning goal in Game 1 of the Stanley Cup Final in 2013 that ricocheted off his shinpads. Throughout his 10-year career with the Chicago Blackhawks and Montreal Canadiens, Andrew was always willing to lay his body on the line and put his teammates before himself. He epitomized energy, determination, grit, and toughness and was a player his teammates loved to play with, but his opponents hated to play against.

Andrew played an integral role on two Stanley Cup Championship teams with the Blackhawks and grew into a leader in the latter part of his career. He kept the locker room on their toes but had the ability to keep his teammates relaxed and ready with his lively personality. Though it is unfortunate Andrew’s playing career is over, I admire him for making this difficult decision and putting his family and his well-being first. Andrew will always have a home here in Chicago and we wish him and his family nothing but the best in the next chapter of their lives.”

Over 10 seasons in the NHL, Shaw played 544 games, amassing 247 points, 116 goals, 131 assists, 574 penalty minutes, and a +24. With his retirement, Shaw became the third longtime Blackhawk Cup-era stalwart to retire from the NHL this season, following Corey Crawford and Brent Seabrook.

“Thank you for giving a Mutt a home.”