In a lockout-filled offseason with little to talk about, one of the discussions that has been common is the value of Johnny Knox to the Bears.  Some look at the bottom line stats and say he is either a star in the making, or at least a top #2.  Others look at his skillset, and see him not fighting off jams, continually cutting off routes or going the wrong way on them (leading to Cutler interceptions), and not fighting for balls, and say he is vastly overrated.  The truth is, Knox does have a ways to go before being a legit #2 WR in the NFL.

Looking strictly at the numbers – 960 yards, 18.8 avg per catch – Many feel Knox took a big step forward last year.  However closer observation of the games show little evidence of this.  In both years with the Bears, Knox has continually illustrated the same repeated issues previously mentioned with his skillset, which has often left Cutler out to dry with turnovers.  On top of that, Knox went from Ron Turner in 2009 to Mike Martz in 2010 – two radically different offenses.  Martz’s offense in particular has been known to inflate WR stats, and those same Wr’s tend to suffer drop offs after he is gone.  Case in point, look up guys like Roy Williams, Mike Furrey, Kevin Curtis, Shaun McDonald – even Torry Holt’s numbers, while remaining impressive, took a 300 yard hit after Mike Martz left St Louis. However, what is truly disconcerting is that between 2009 and 2010, in both systems, Knox remains someone who has the same issues with route running, getting off of jams, and pretty much everything with getting him the ball other than his ability to catch.  It’s entirely possible that Knox has plateaued – what you’ve seen is what you get, and that skillset will not improve, which is troublesome given Knox is not someone who has natural Wide Receiver instincts to begin with.

However, once you get the ball in Knox’s hands, he undoubtedly has very good talent, and any lack of toughness in getting the ball is then flipped, as he is very tough once he has it.  Knox has his good points, and can definitely pour it on when the ball is in his hands; it’s getting the ball there that is the adventure.

What’s curious to watch, once the season resumes, is whether Mike Martz is down for the ride.  Martz has a reputation for being extremely picky about his system, and even leaving behind those who are unable to tackle it.  There have been news articles and rumors of Earl Bennett getting increased playing time, and the Bears going after Braylon Edwards, and if these come to pass, it could mean Martz is in the process of evaluating Knox in this offense and deciding that he just isn’t ready yet.  Even more troubling is Knox lacks the toughness to go over the middle, and has demonstrated alligator arms in-game before when having to catch the ball in heavy traffic.

This doesn’t mean Knox is without value, however.  Keep in mind he is a 5th round pick, and for that pick, coming from a small school, he’s actually playing above his draft position as is.  And there is room to grow for Knox, and it is possible that the lack of growth between year 1 and year 2 could simply be attributed to a very young player from a small school having to learn a new offensive system in his second year, and that could attribute to his stunted growth, leaving hope for future development. 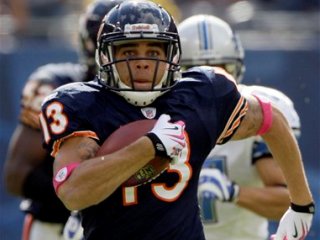 And even as is, if the Bears do put a free agent as their #1, and move Earl to the #2 spot, having Knox as your 4th or 5th option coming off the bench isn’t a bad thing in an offense that sports a lot of 4 and 5 wide receiver sets – he’d create matchup issues against linebackers and safeties, while at the same time, minimize any issues if he runs the wrong way on a route again or cuts off another route, because he wouldn’t be one of Cutler’s main options.  This would also give Knox time to solidify his learning of the position, get his head in the game, while also allowing frequent looks on the field for Knox to continually monitor his progress.

In that sense, it might be better motivation to have Knox go earn the #2 WR spot rather than simply handing it to him.  It will be curious to see what moves the Bears make once the lockout lifts and free agency begins, because it will go a long way towards whether the Bears have confidence in Knox to keep the #2 spot, or whether they acknowledge that Knox still has a ways to go before fulfilling his potential.

2 thoughts on “In spite of numbers, Knox a Ways to Go”