With the Chicago Blackhawks in total rebuild mode despite their strong start to the new season, everyone around the league is keeping a close eye on Patrick Kane and if or when the Blackhawks decide to trade him. According to TSN’s Darren Dreger Kane and his agent are undecided about whether or not to ask for a trade. Only time will tell if the Hawks choose to move Kane though after an extremely active offseason for GM Kyle Davidson it is likely that Kane will be moved one way or another. With that being said let’s look at 3 potential trade packages for the 9-time all-star. 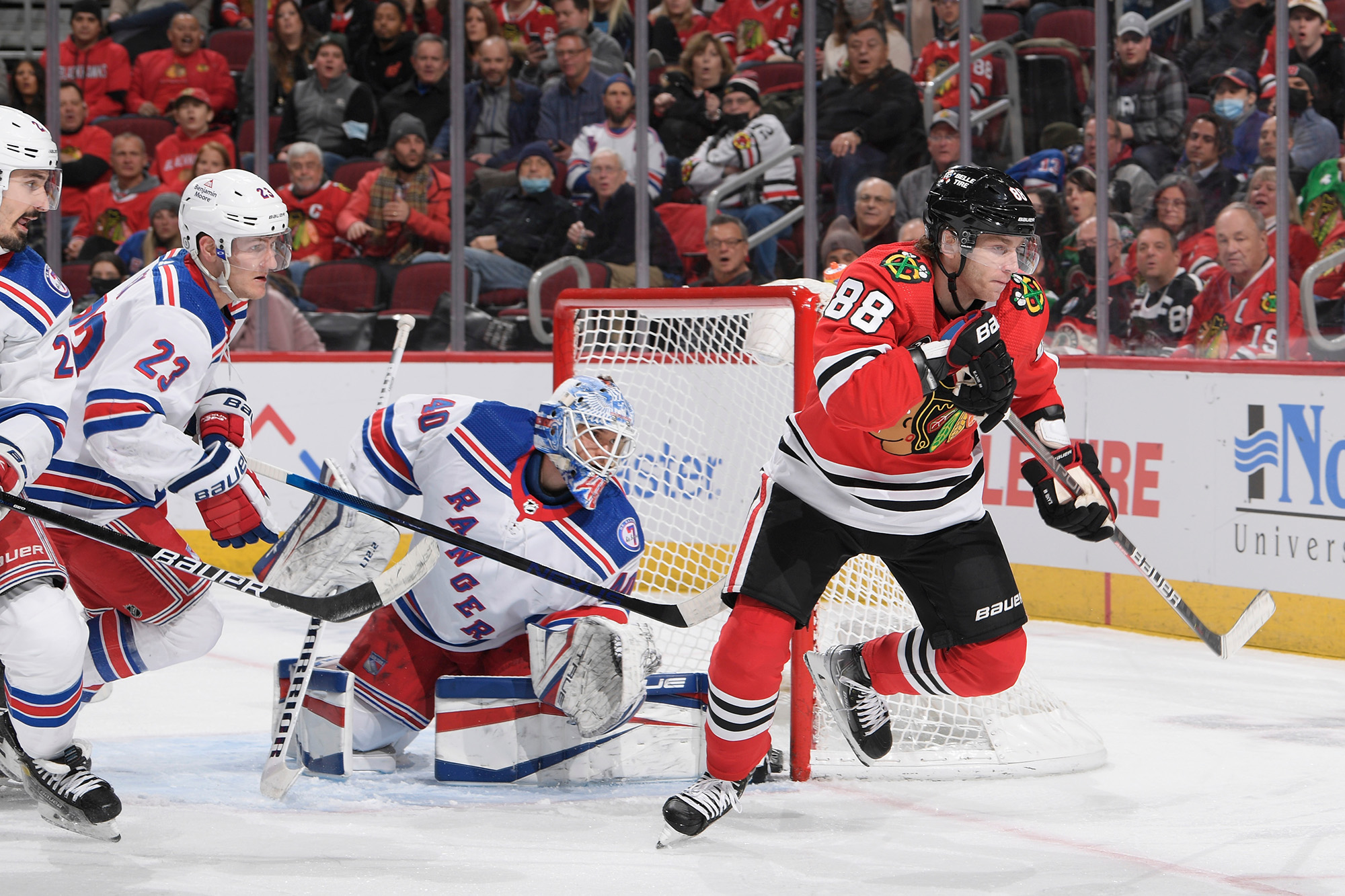 Patrick Kane and the New York Rangers have been linked together for some time now as the Rangers are probably the most logical landing spot for “showtime.” If the Rangers and Blackhawks decide to pull the trigger on this trade the trade would probably look something like this.

Blackhawks get : Alexis Lafreniere and a 2023 1st round pick

This would honestly be a great trade for both sides. Kane gets his “hypothetical” wish and gets the chance to win another cup and the Blackhawks add a former 1st overall pick in Laf and add even more draft capital for 2023. Lafreniere would also benefit from this trade as he is currently buried on the Ranger’s depth chart, he would get to play top 6 minutes in Chicago and a real chance to really tap into that 1st overall potential regardless of the fact that he has yet to live up to the hype.

The Blackhawks could probably even squeeze out another future 1st round pick out of the Rangers for Kane but those who are saying that they’ll get Lafreniere and Kakko from the Rangers it’s time to turn off your video game system. 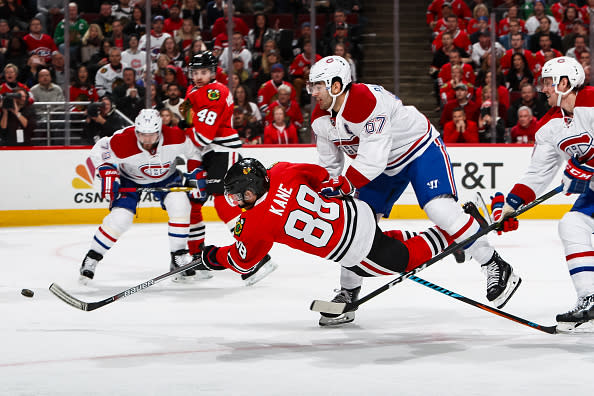 Another team that has been linked to Kane is the Montreal Canadiens. In this potential trade package the Blackhawks receive a 1st round pick from the Canadiens and two players.

Blackhawks get: 2023 1st round pick, Kaiden Guhle, and Mattias Norlinder

In this trade we see the hawks focus on defensive pieces as the main return. Everyone knows how important defense is as evident by the Blackhawks dynasty headlined by guys like Duncan Keith, Brent Seabrook, and Niklas Hjalmarsson. Kaiden Guhle is a former 1st round pick of the Canadiens and is regarded as a “brilliant defender.” He would be the main prize for the Blackhawks in this trade.

As for Mattias Norlinder he is a former 3rd round draft pick who is an offensive minded defenseman. He is known as a great skater with a solid shot from the point. Imagine if the Blackhawks get Guhle and Norlinder and use this 1st rounder on another uber talented defender. Their blue line would be shored up for years to come. 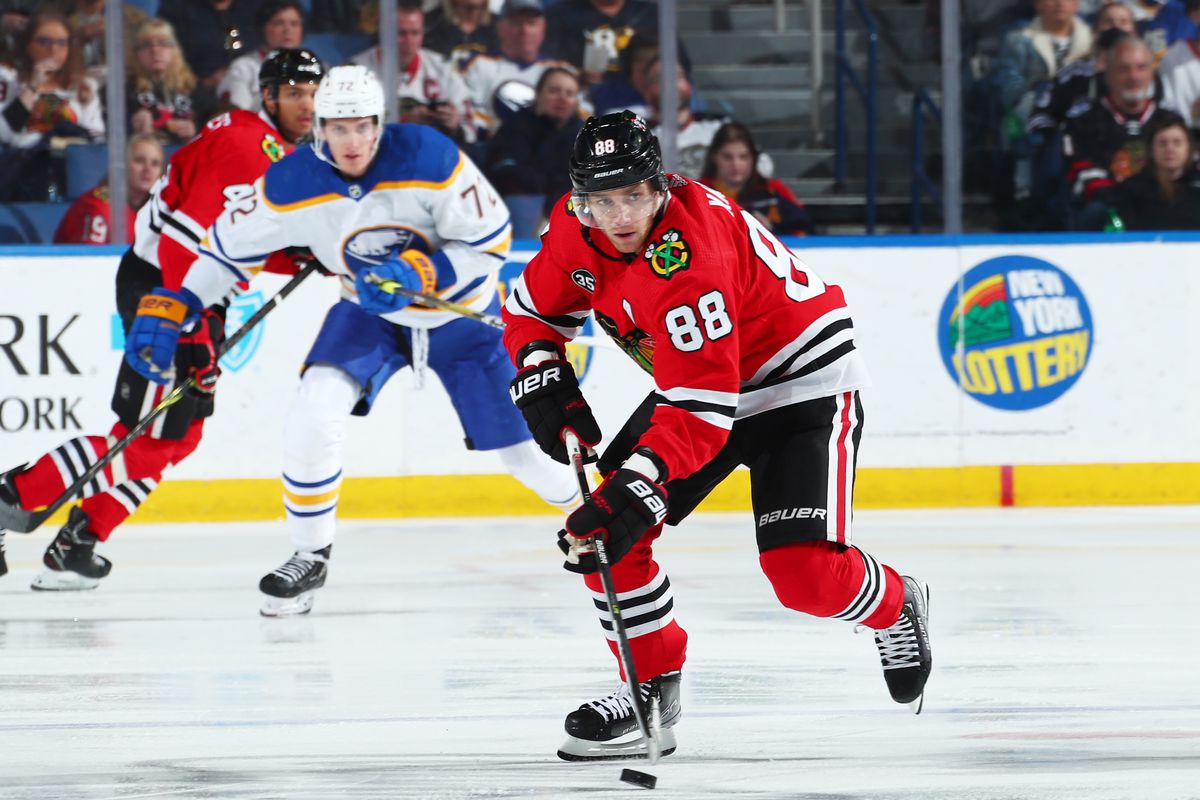 This potential trade is contingent on Patrick Kane being okay with being traded to his hometown Buffalo Sabres. Kane has made it very clear that if the Blackhawks are to trade him he wants to go to a team that has a chance at winning a Stanley cup sooner rather than later. With that being said, let’s get into it.

In this trade the main prize is clearly Jack Quinn. Quinn went 8th overall back in the 2020 NHL draft and dominated the AHL in the 2021-22 season. In 45 games Quinn found the back of the net 26 times and totaled 61 points. That is unheard of for someone who was only 20 years old at the time.

Kyle Davidson has made it very clear by his moves this offseason that he is trying to get as much draft capital as possible for the 2023 NHL draft and beyond. In this trade he get’s his wish all while netting a former top 10 overall pick.