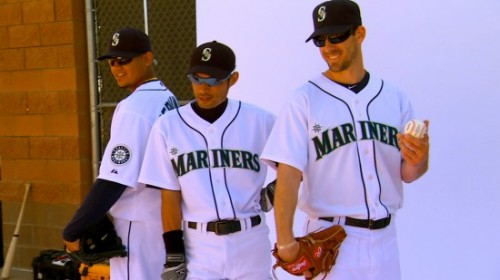 The Chicago Cubs (31-38) take hit the road to the Northwest to take on the Seattle Mariners (28-41) for 3 games at Safeco Field. The Cubs come into town after a disappointing 4-5 home stand, while the Mariners are riding a 4 game winning streak including a three game sweep of Cubs division rivals Cincinnati Reds.

There’s sure to be more than just baseball talked about during this set as Carlos Silva returns to start game 3 with an 8-2 record on the year and a 3.02 ERA. A significant difference from the two years he spent in Seattle going 5-18 with an ERA over 6. He was dealt to the Cubs in what appeared to be a swap of issues for Milton Bradley. Bradley like most of the Mariners offense has been a disappointment. He’s hitting just .215 with 6 home runs and 25 driven in. Both teams rank in the bottom half in runs scored, but in the top half in runs allowed. Ichiro Suzuki has remained true to form however. He comes in tied 4th in the AL with a .336 batting average and 2nd in hits with 95.

Game 1 features Ryan Dempster (5-5, 3.67) matched up with Jason Vargas (5-2, 2.88) who has been a pleasant surprise for Seattle. Both pitchers are coming off solid starts. Last week Dempster threw 6 2/3 innings of two run ball against Oakland, while Vargas tossed 7 2/3 allowing just one run against St. Louis in a 2-1 Mariners win.

Randy Wells (3-5, 4.92) goes against the Mariners’ first ace, Cliff Lee (5-3, 2.55) on Wednesday. Lee is coming off his best outing of the year tossing a complete game 1-0 shutout against the Reds. Lee’s control has been nothing short of magnificent having walked just 4 batters while striking out 67. He’s one of only four pitchers to accomplish this feat in the last 110 years joining Ben Sheets, Bret Saberhagen, and former Cub legend Greg Maddux.

Thursday’s finale features the aforementioned Silva against Seattle’s second ace Felix Hernandez (5-5, 3.39). Hernandez followed up Lee’s brilliant effort with one of his own in twirling a complete game against Cincinnati allowing only one run. Silva is hoping to get back into the win column after losing his last two starts despite pitching well enough to win.

Aramis Ramirez continues his rehab down at Single-A Peoria. He’s played in two games going 1-6 with a walk and one RBI. He’s eligible to come off the DL Wednesday. Ramirez was to be re-evaluated Monday according to Lou Pinella.

Mariners right-hander Ian Snell has cleared waivers after being designated for assignment and accepted the team’s request to report to Triple-A Tacoma.

Cubs radio broadcaster and legend Ron Santo did not make the trip to his hometown due to complications from his battle with diabetes. Santo has decided to reduce his travel schedule as a result.