Stop Losing to the Orioles! 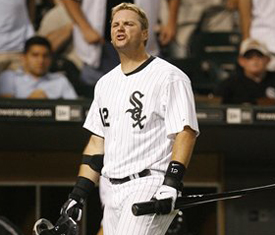 While the Twins are in the middle of being 4-game swept by the Rangers, the Sox are falling to the Orioles, at home.

Yesterday night, the White Sox won a big game cutting the division lead to 3.5 games.  Today they had a golden opportunity to make that lead 2.5.  But instead, in a matchup between perennial star Mark Buehrle, and struggling youngster Brian Matusz, the Sox fall 4-2.

In one inning Konerko, Quentin, and Pierzysnki all popped up in the infield.  Another inning Beckham led off with a bomb, and the top of the lineup followed him with 3 consecutive poor at-bats.

They just don’t seem to be in the game.  The chances are here.  The Twins are not untouchable (especially when they are NOT playing the Sox).  So, it’s time to man up.  Make a move here.

Someone has to stand up and be the man.  Maybe it’s Manny Ramirez, maybe it’s Carlos Quentin, or Juan Pierre, maybe it’s a Mark Teahen or Omar Vizquel type.  I don’t care who it is.  But I’ve been begging for this for quite some time, and every day that slips away feels like another punch to the already wounded boxer.

The Sox can win this thing.  They can have a good week and find themselves back in front in this race.  But they need to start playing better.  And it’s as simple as one or two players coming up big in a couple situations and re-energizing this team.

Tonight the chance was in A.J. Pierzynski’s hands.  Tying run at the plate, reeling pitcher on the mound.  Step up and hit the ball hard somewhere.  Bring back that untouchable feeling this team had earlier this year.  But no, he goes down on 3 pitches and looks like a clown in doing so.

The starting pitching has been there.  The bullpen has been downright atrocious.  But the hitting has not stepped up like they need to.  Give me another 12-0 game against the Twins.  It can go a long way in re-fueling a team that needs to kick it into turbo real soon.