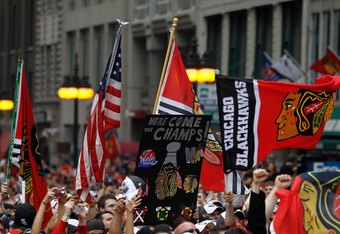 Many fans have pronounced their mere disgust for what has unfolded in the past few weeks.

Unfortunately, what some are forgetting is the path of a champion and what it takes to repeat.

Look back over the past two years at the success of the Detroit Red Wings and Pittsburgh Penguins, the two most recent Stanley Cup Champions aside from the Hawks.

Detroit, after winning the Stanley Cup in 2008, was in position to have the opportunity to better a team that already was a proven winner.  They took this chance by signing the current Hawk, Marian Hossa.

Ideally many thought with the acquisition of Hossa, the Red Wings were a team destined to be the next dynasty.

Arguably, it was just that.  Unfortunately, the Wings could not close out the series against the Penguins in the Stanley Cup Finals rematch.

So how would the Penguins respond in defense of their Cup climb?

Put it this way… injuries… inconsistency… and more injuries.

During the first half of the title-defending season, the Penguins started nearly ten different defenseman and had another four forwards out as well.

With line changes and adjustments, it isn’t hard to understand why a title defense can be so difficult and tiring.

After limping into the 2010 playoffs; the two recent, repeat finalists never showed the dominance they had over the past couple years.

Maybe lack of urgency on Pittsburgh’s end in responding amidst team adversity.

Maybe the Wings are just generally past their prime, seeing as the average player age is just above 31 years old.

In retro-spect what can the Hawks take from this?

You can’t tell a team to be younger, they simply are.  The Hawks average age is slightly above 27 years old.

Can you teach a team how to deal with adversity?

Ideally many think the Blackhawks have already dealt with their fair share of adversity the past two season.

Enduring doubts of youth and bouts of injuries themselves, some could say there isn’t anything the young Hawks have not seen yet.

Through tribulations of team restructuring and re-shaping, the Hawks still have a solid chance of contending next season as one of the league’s elite.

Logically speaking, there may be some things that have to come together.

Acknowledging five points surrounding the club can give insight on how they can build on their success.

You hardly ever hear both words going hand in hand.  What the Hawks were able to accomplish at such a young age was incredible.  Skeptics weren’t ready to give Chicago the keys to the West, while the infamous NHL video game did.

Maybe it isn’t a coincidence that a team known for their up-beat college banter, was predicted NHL champions by a technology that  bonded a team.

If anyone wonders what that may refer to, check out the Blackhawks Official website where you can see hotel film of the brotherly love.

It takes a team to compete as one to win anything.

Similar to the youth aspect, the Chicago clubhouse is unique amongst many for the knack of being a family.

On and off the ice, the players treat each other as brothers.  Whether it may be through heckling or offering in-game advice, it allows the coaching staff the ability to change lines without losing production.

Coach Quenneville un-deniably took the Hawks to the next level when he took over the reigns from former coach and player Denis Savard.

Not coming without criticism at the time, the pain was obviously felt in the locker room.  Especially seeing as it was Savard who brought the “family” atmosphere into the organization.

In the end, Q brought what was undoubtedly the final piece to what would be a Stanley season.

Known for mass, mid-game line changes and his intensive work ethic, Coach Q made Chicago into what it is now.

Those doubting it can jump on the first band-wagon heading out of town.

As the Hawks have perhaps disbanded some of the fan-favorites, the skill needed to maintain a winning atmosphere remains.

For starters, the Blackhawks have a great top six set of forwards and perhaps one of the best top four defensive lineups any team could offer.

Obviously, with the Niemi arbitration date approaching this could change.

With the exception of possibly losing Patrick Sharp, anyone else can be replaced.

While some say it is about damage control, it is hardly so.

In order for the Hawks to have to minimize the damage they would have to assume that the 2010-11 Stanley Cup is theirs.  A team known for and led with humility hardly believes this.

The players and front office are in agreement of what has been done from a business stand point. To get a championship steps need to be taken.

The Blackhawks have now not only positioned themselves for current greatness, but future dominance in the Western Conference because their organization is absolutely stacked now… aka No. 5.

Fans shouldn’t be worried by what this coming season may hold, but excited at the fact that the teams success feeds off of how the front office cares for them.

The future is brighter than it has ever been, and that is with a Stanley Cup Championship under their belt now.