The Chicago Bears couldn’t finish against the Falcons

The Chicago Bears had their chances to win in Week 11. The Bears had another opportunity to win a game on their final drive. They failed to do so for the third straight week. The Bears’ coaching staff made some odd decisions in the game. The team activated Teven Jenkins but didn’t start him. The decision only looks worse after Fields was noticeably hurt after the game.

The Bears are now 3-8. Going to the playoffs is out of the question for this team. They will need to use their next six games to evaluate the talent they have and where they need to plot their offseason moves to make the Chicago Bears a contender again. They showed against the Falcons they’re close but just not quite there yet. Here are three studs and duds from the Bears’ loss to the Falcons.

The Bears saw quite a few former teammates in red jerseys Sunday. Several made positive plays against the Bears. Falcons return man and running back Cordarrelle Patterson had a kick return for a touchdown. He fumbled the ball early in the game but quickly made up for it. In the fourth quarter, Patterson had several vital runs to move the ball into scoring position and take the lead on their final drive. He finished with 52 yards on ten carries.

Defensive lineman Abdullah Anderson recorded a sack on the day. He finished with four tackles. Former Bears pass catchers Damiere Byrd and MyCole Pruitt had long receptions of 19 and 17. Current Falcons executive and former Bears general manager Ryan Pace did something for Chicago he couldn’t do during his tenure there. Set the team up for better draft capital. Eberflus has been criticized for his first-half defense getting rocked in the first half before he answers challenges in the locker room at halftime. His defense gave up an opening touchdown. After that drive, the Chicago Bears defense looked a lot more competitive. They gave up 20 total points on defense. (Patterson’s kick return touchdown accounted for the other seven points.)

With the Bears new explosive brew on offense, holding an opponent to 20 points should net the Bears a win. Not too bad with the roster the Bears have on defense after trading away their core players from 2021. 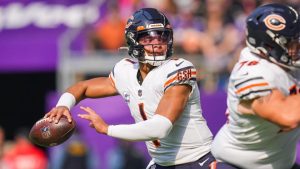 Fields looked more comfortable in the passing game against the Falcons. He ran the ball well, but Fields made crucial strides in his passing game. His only touchdown pass of the day was right on the money. Fields made some incredible throws in the fourth quarter to give the team a chance. Fields was an efficient 14-21 for 153 yards and one touchdown to one interception. (The interception was thrown high but hit the hands of his intended target.) Those are solid numbers for 21 attempts.

He orchestrated a pass to David Montgomery on the Chicago Bears’ last scoring drive, where he fought to keep the play alive and pointed to his running back where he needed to go. Fields hit his target, even if it took 12 seconds to do so. (That won’t help his “holding onto the ball too long” stat.) Unfortunately, the Bears’ chances ended on the next drive when Montgomery put his hands on a pass and couldn’t come up with it. The deflected pass went to a Falcons defender for a game-deciding interception. Gordon had a few nice plays. He had a drive where he had important back-to-back tackles. Other than that, the rookie continued to stink up the Chicago Bears’ secondary. Gordon gave up a touchdown reception to start the game. He’s been awful in coverage all season. Gordon continued that streak in Week 11. Gordon’s got to be better the rest of the season, or he’s quickly heading into “bust” territory.

Seeing Drake London get in the endzone >>>pic.twitter.com/I1whXc5TbX

The Bears’ offensive line had a terrible day. Fields was sacked four times on the day. He was constantly running around in the backfield before he could attempt to throw downfield. The run blocking wasn’t much better. This falls on the offensive line that was on the field for sure.

However, why was Teven Jenkins active if he wasn’t going to see the field? The Bears kept their best offensive lineman on the sideline, resulting in a disaster. That’s on the coaching staff. It’s going to be hard for the Bears to get the ball to Chase Claypool if they can’t block long enough for his route to develop. 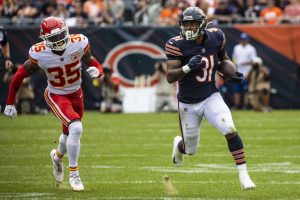 The Chicago Bears tried the Ebner experiment. It failed. The 2022 sixth-round pick had a chance to get substantial playing time with running back Khalil Herbert going on the injured reserve. He didn’t do well as Montgomery’s backup. Ebner finished with eight yards on six carries. Just 1.3 yards per rush. Ebner’s performance was easily the worst by a Bears running back this season. 1.3 yards per rush is hard on an offense that runs consistently for over 200 yards a game.