Skip to content
Adam Rittenburg of ESPN breaks down the Big Ten football from Week 1. He also provides a preview for Week 2. 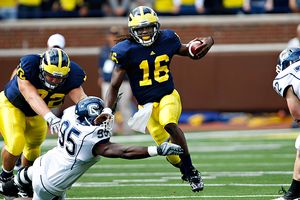 Team of the Week: Michigan. Many picked the Wolverines to lose its opener against UConn, and almost no one thought the Wolverines would win convincingly. Behind do-it-all quarterbackDenard Robinson, a powerful offensive line and an opportunistic defense, Michigan stormed out of the gate and never looked back, beating Connecticut 30-10. The Wolverines still have some issues on defense, but if Robinson stays healthy and keeps this up, the Maize and Blue will be tough to beat.

Best game: Minnesota-Middle Tennessee. Considering nine of the 11 games were decided by more than one score, there were not many choices here. At least the Gophers brought some drama in Murfreesboro, rallying from a 17-14 second-half deficit to win 24-17. Minnesota also provided the most touching story of the weekend, as fullback Jon Hoese rushed for three touchdowns and recovered a fumble just days after his father suffered a severe stroke. Hoese nearly didn’t make the trip.

Biggest play: After a somewhat sloppy first 30 minutes by Penn State, Chaz Powell created some distance on the scoreboard with a 100-yard kickoff return for a touchdown to open the third quarter. Powell, back at wide receiver after being moved to cornerback this spring, had Penn State’s longest kick return since Rich Mauti’s 100-yard runback in 1975. Honorable mention goes to Wisconsin defensive end J.J. Watt, whose forced fumble led to a touchdown early in the third quarter against UNLV after the Badgers led by only three points at halftime.

Best call: Joe Paterno and his staff made a historic call by starting true freshman quarterback Rob Bolden in the opener, and it paid off. Bolden showed impressive skills and poise, completing 20 of 29 passes for 239 yards with two touchdowns and an interception. Rich Rodriguez’s decision to go with Robinson at quarterback for Michigan also looked good.

Game balls (given to players not selected for helmet stickers)

How bizarre: Northwestern’s victory at Vanderbilt was sealed on a very questionable penalty call by Big Ten officials. Quarterback Dan Persa appeared to be stopped just short of a first down with less than two minutes left, bringing up fourth-and-1 and a likely punt. But officials called Vandy’s Jay Fullam for a helmet-to-helmet hit — replays showed he led with his shoulder — and the penalty allowed Northwestern to run out the clock and escape with a 23-21 victory.

Miami (1-0) at Ohio State (1-0): The nation’s top matchup pits Jacory Harris and the Canes against Terrelle Pryor and the Buckeyes (ESPN, 3:40 p.m. ET). Miami and Ohio State meet for the first time since the 2003 Fiesta Bowl, which gave the Scarlet and Gray their last national title. Buckle up.

Penn State (1-0) at Alabama (1-0): Joe Paterno heads to the home of the Bear, although this time he’ll face Nick Saban and the defending national champs(ESPN, 7 p.m. ET). Bolden surprised a lot of folks with his play in the opener. Now he’ll try to shock the world against the Tide.

Michigan (1-0) at Notre Dame (1-0): Who ever thought this matchup of tradition-rich powerhouses would feature two spread offenses? If Michigan’s Robinson pulls off a repeat performance against Manti Te’o and the Irish defense, the Wolverines should be 2-0.

Iowa State (1-0) at Iowa (1-0): Adrian Clayborn didn’t mean to tick off Iowa State with his “only team in the state” comment, but you can bet the Cyclones will use it as motivation Saturday (ABC, 3:30 p.m. ET). Iowa’s Hampton plays his first game since 2008.

Michigan State (1-0) vs. Florida Atlantic (1-0) at Detroit: How weird will it be to see the Spartans wearing their road unis for a game in nearby Detroit? Florida Atlantic is the home team Saturday (ESPNU, noon ET).

San Jose State (0-1) at Wisconsin (1-0): After a few hiccups in the opener, Wisconsin aims for a cleaner performance at home (ESPN, noon ET) against a San Jose State team that lost by 45 to Alabama in Week 1.

Southern Illinois (1-0) at Illinois (0-1): Can you say must-win? SIU is typically one of the nation’s top FCS programs, and the Salukis would love to score an upset against the state’s top public school. Illinois quarterback Nathan Scheelhaase tries to bounce back from a rough opener in front of the home crowd.

Western Illinois (1-0) at Purdue (0-1): Something tells me Robert Marve and the Boilers offense figure things out in a big way this week, although Western Illinois blanked Valpo 45-0 in its opener.