Today was a big step forward for the Chicago Cubs. As they are making big changes for success. One being the Theo Epstein acquisition and the long awaited press conference finally arrived. Here’s the key points during the press conference that I caught or thought was key.

*“It truly feels great to be a Cub.”
*”I like to work with Kenney and in the future too, he’s been great.”
*”I like Jim Hendry and how he stayed on this summer in the circumstances.”
*”Thanks the Boston Red Sox front office, ex manager Francona and their players.”
*”I like all aspects of the Cubs; ballpark, day games, fans, etc.”
*”I will focus on player developing, like Ricketts wants. That already has proven with this past draft and the spending. We will try hard and get the players through the minors and make an impact on the Cubs.”
*”Getting to know players in the minors and getting to know the players overseas to make them feel more comfortable is a big priority for me.”
*”I have talked to Mike Quade and will talk to him in person soon and see how he wants to go forward.”
*”I was happy with what the Cubs did during the draft and knew they were all in and want to change of the culture down there. “
*”I loved that I was a Red Sox and wouldn’t want to change that experience with anything. It was just time for a change.”
*I want to build a competitive team for years and years. Not just one year and then in a few years down the road.”
*”I was ready for the next big challenge. This is the ultimate challenge.”
*”Winning is the #1 priority.”
*”I want a good clubhouse team, who cares about each other and about winning. Not just about their self.”
*”There are no shortcuts in baseball.”
*”Cubs and Red Sox have a great working relationship and I expect that to stay the same going forward.”
*”Compensation will be completed soon in the next upcoming weeks. With it bringing in a 3rd party or not.”
*”Defense is an important aspect and will be worked on. In the majors and the minors.”
*”We talked baseball along time during the meeting and how we want to go forward. The minor leagues to the big leagues.”
*”I’m happy to be a Cub and hope to be a Cub for a long time. “
*”One reason I wanted to come to the Cubs is we haven’t won a world series in a very very long time and that interested me. “
*”Best organizations use scouting and analysis’s.”
*”I never comment on players contracts and payroll. The Boston media will know that very well. “
*”I want to have as many players in their prime, hopefully some are home grown. That’s the best formula for success.”
*”I’m hyper competitive and over drive for success. “
*”I try to find impact personnel on other teams that will make us better.”
*We are going to add player development and scouting every year.”
*”I figured my tenure was coming to an end in Boston and trying to find the best next challenge was the right decision.”
*”The last couple weeks have been interesting. We had a meeting with other staff yesterday and seemed to be the guy in the movie “Office Space”.”
*”Job was more interesting because I can lead baseball operations. There are more projects under development that I can help with and improve. I’m happy to work with the people in Chicago.”

Tom Ricketts- Chairman/Owner of the Chicago Cubs:
*”Epstein will only report to me and I will have full support for all of his staff.”
*”Crane Kenney officially is President of Business Operations.”
*”I want to congratulate Randy Bush and all his hard work on this deal”
*”It will be Theo’s decisions and will be accountable for all the decisions.”
* I started with no list in looking for a new president/GM.  Evaluated all 30 teams and how the system was in their organization.”
*”I had no intentions in addressing  the open spot during the decision. Waited ‘till the right time and the time was now.”
*”After 10-15 minutes talking to Epstein, I knew he was the guy I want running the Cubs.”

One question that was not asked and I was surprise. The question; “was that you at Starbucks?” But an answer he made to a question, sounded like it was him. However, it was not officially confirmed.

All in all, I thought it was fun to watch and happy to still be a Cubs fan. Will never change to a new team, NEVER!. It also shows Tom Ricketts is all about winning and trying to build the best team possible, starting with the people who make the moves. Jed Hoyer is expected to be announce the new Cubs GM after the world series concludes, per Carrie Muskat. We man see a press conference for that too, but not sure. 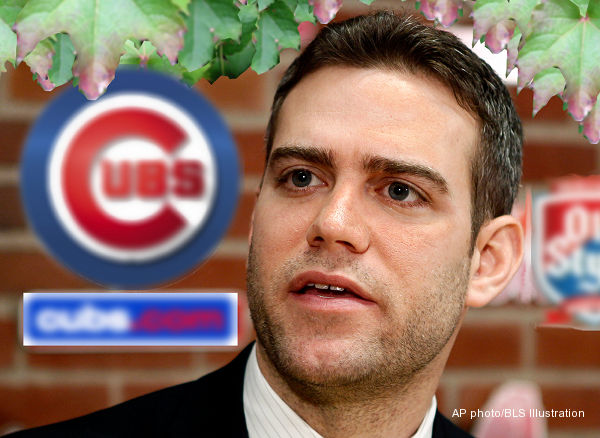