Justin Fields is now entering year two of his NFL playing career. By now he is a household name in Chicago and just about the rest of the football world and Bears fans are hoping he is the long term answer for a team that hasn’t had consistent QB play in years.

The Bears must think highly of him being that they traded up to grab him and ever since they did, the hype train has gone off the rails and doesn’t show any signs of slowing down. Fields has been turning heads ever since he was in high school, let’s dive into the rise of Justin Fields and give Bears fans some reassurance that they have every reason to be excited about the true potential of their young QB.

A Phenom is born

This is where Fields initially got on the radar for not only power 5 colleges for football but baseball as well. Fields was quite the standout baseball player in his high school days. So good in fact that he was garnering attention from MLB teams for the 2018 MLB draft (by the way he can still swing it.)

This puts Fields in excellent company, other standout QB’s who had a background in baseball prior to the NFL include Patrick Mahomes, Rusell Wilson, and Kyler Murray. As for the gridiron, Fields dominated in high school. In just two seasons as Harrisons starter Fields put up 4,187 passing yards, 41 passing TD’s, 2096 rushing yards, and 28 rushing TD’s.

Did I mention yet that Fields played only 7 games his senior year? Yeah Fields was THAT good in high school. When It was time for Fields to go off to college his trophy case was already filled with awards like 2018’s Mr. Georgia Football award, the 2017 Elite 11 MVP award (went against current NFL QB’s Trevor Lawrence and Matt Corral) and numerous all state awards. Fields was also ranked the NO.2 overall player and the NO.1 overall dual threat QB in the 2018 recruiting class. A star was well on his way to being born. 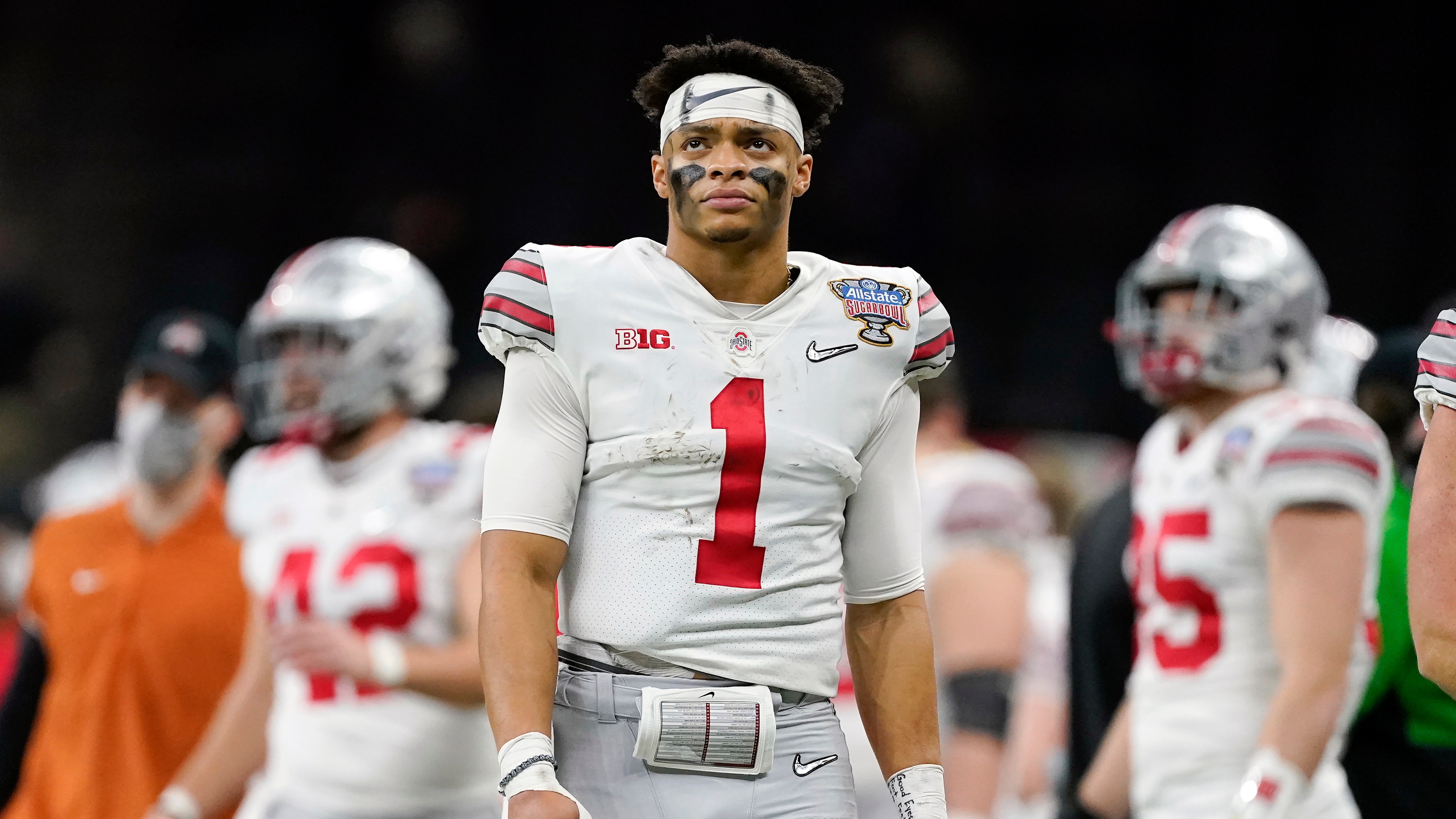 The Justin Fields hype train took a quick detour in 2018. Fields honored his commitment to his hometown Georgia Bulldogs where he played backup for a year under then starting QB Jake Fromm. After the 2018 season, a season in which the Bulldogs went all the way to the national championship, Fields made what can now be called the best move of his young career.

Fields transferred to Ohio State and the rest was history. He wasted no time in proving that Georgia made a huge mistake by starting Fromm over him by having one of the best seasons in NCAA history. In 2019 Fields threw 41 TD’s to just 3 interceptions and added 3,273 yards through the air and just about 500 on the ground. He also rushed for 10 TD’s proving that his top ranking of dual threat QB’s was no fluke. Fields won numerous awards for his performance in 2019, highlighted by a Heisman Finalist accolade. By now discussions are arising of if Fields will be the NO.1 overall pick.

Fields followed up his 2019 superstar year with yet another sensational year. A year in which he won the BIG 10’s award for best overall player, best quarterback in the BIG 10, and his second First team All BIG 10 nomination. Now the question wasn’t where and who would draft Fields, but who is lucky enough?

Justin Fields did not exactly fall right into Chicago’s lap.

I am very sure that at the start of the 2021 draft landing Justin Fields was nothing but a pipe dream for the Bears. The Bears were originally slotted to pick 20th overall in the first round with virtually no chance to land any of the top QB prospects from that years class unless they made a move or someone slipped in the draft. Maybe the football gods wanted to give the Bears a break or something because that is exactly what happened.

Justin Fields slid somehow out of the top ten and the New York Giants were on the clock at NO. 11. The Bears jumped at this opportunity and agreed to a trade with the Giants which sent the 20th overall pick, a 2022 first rounder, 2022 4th round pick and a 2021 5th round pick in exchange for the 11th overall pick which the Bears ultimately used to draft Justin Fields. This trade is looking better and better for Chicago as Fields is just getting started and seems to improve every week.

The Bears got a good one and couldn’t have a better prospect to build around and hopefully bring the coveted Lombardi trophy back to Chicago.