After the Chicago Blackhawks championship run in 2010 they visited Wrigley Field during the Crosstown Classic. It was nice to see players and coaches on both sides celebrate the championship for Chicago and even managers Ozzie Guillen and Lou Pinella got to converse with coach Joel Quenneville before the game. Baseball divides this city, but teams like the Bulls, Blackhawks, and Bears unite it again, and this was a great moment for both sides.

When Michael Jordan retired from basketball to play pro baseball, Bulls owner Jerry Reinsdorf offered him a spot with the other professional team he owned, the White Sox. Jordan wasn’t successful in his baseball career, however, when he came to bat at Wrigley Field during the Classic in 1994 he received a standing ovation from both White Sox and Cubs fans alike. He would get an RBI single and double, as well as scoring in the game.

8. Magglio and the Ivy 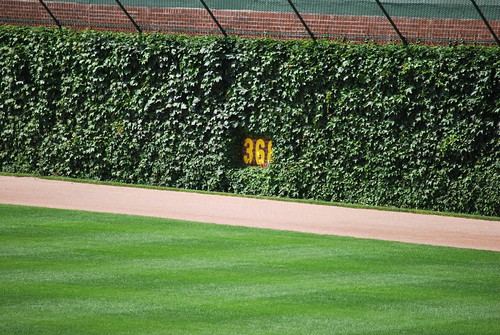 One of the many charms of Wrigley Field is its Ivy that lines the outfield wall. Magglio Ordonez might think of the Ivy as something less than charming after a game in 1998 where Ordonez hit a gapper double to wall and a two runs, including the go ahead run should have easily scored. But, the ball got stuck in the ivy and the hit was ruled a ground rule double and the runner had to be held at third. The Cubs weaseled out of the jam and Brant Brown was able to homer in the 12th to give the Cubs the victory en route to a sweep of the Sox.

Looking back this moment signaled the beginning of the end for Zambrano in Chicago. After going down 4-0 to the Sox in the bottom of the first Zambrano complained about a general lack of effort from the team. Then first baseman, Derrick Lee, defended the team and the two had to be separated by manager Lou Pinella. Z was sent home and general manager Jim Hendry stated that the Cubs would play with “twenty-four before we tolerate that kind of behavior.” Z would eventually be traded to the Marlins for Chris Volstad, he hasn’t had much success since this incident.

“I puke every time I go there” were the words uttered from then Sox manager Ozzie Guillen’s mouth in 2009. Ozzie Guillen has had a famous distaste for Wrigley and makes it known every time he is in the visitor’s locker room. It often made for good press and always annoyed Cubs fans. Shenanigans like this is what makes a rivalry great. A good grudge match is always in need of a good antagonist.

Carlos Lee, who has long been known as a “Cubs killer” no matter the uniform he wears, jacked a walk-off grand slam at US Cellular Field during the tenth inning in front of a crowd of over 45,000 fans.

4. AJ Pierzynski Pisses Off A Fanbase

With two out in the ninth inning and closer Ryan Dempster on the mound the Cubs seemed to be in line for a victory. That is until the master of antagonization himself AJ Pierzynski crushed a ball into the right field bleachers to give the Sox an 8-6 lead. This was after the incident that you will see at number one in this list and because the Cubs were also 1-11 in their last 12 home games at the time. This was the ultimate sign of frustration for the North Side faithful and they unfortunately showed it in the wrong way as their fanbase received flack for this incident for years to come.

3. Aramis Ramirez Walks Off the Sox

The Cubs had previously been swept by the Sox at US Cellular Field and this was the Wrigley part of the series. With the White Sox looking for redemption, they took a 3-1 lead into the bottom of the seventh inning. They kept that lead until Derrick Lee and Aramis Ramirez went back to back and brought the game to a tie. The Sox couldn’t score a run in the eighth or the ninth so they trotted out Scott Linebrink to try and bring the game to extras in the bottom of the ninth, that is when Ramirez struck a solo home run to dead center to give the Cubs the series. North Siders were elated and the Cubs went on to win the next two games as well.

Kerry Wood may be one of the best Cubs of all-time as far as stats and love go. He wasn’t one of the best, but the affection that this city showed him really put him above some of the other famous Cubs of all time. For the guy who started off his career with a bang and struck out twenty batters in a game, it was only appropriate that he end his career on a strikeout, and of a White Sox batter no less. As a White Sox fan myself, this moment gets me, Wood is truly a class act and will always have a place in Chicago, on the North or South Side of town.

C’mon you all knew it was coming, and if you didn’t I question your fandom. Here it is, courtesy of MLB’s youtube channel. This was the height of the Cubs-Sox rivalry. 2006 was by far the best year of the rivalry as so much went on. Since then, the rivalry has really died down. But this moment was the epitome of the rivalry and is still talked about to this day in Chicago.