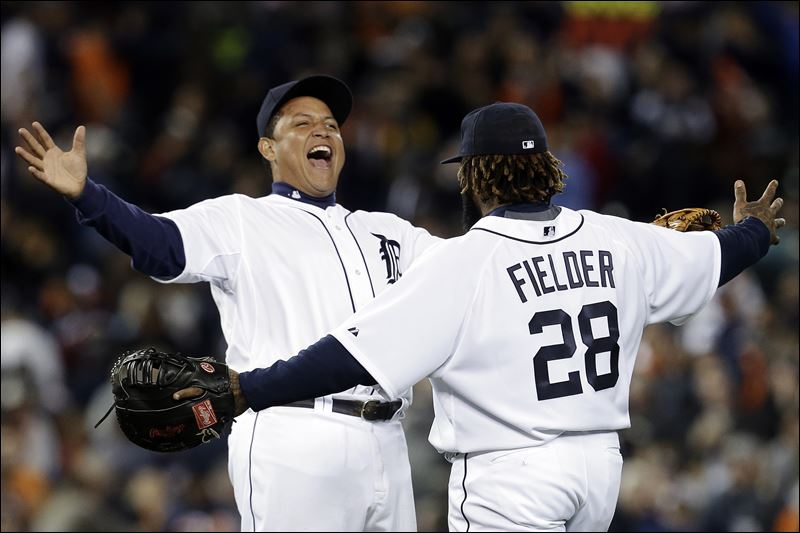 Prince Fielder and Miguel Cabrera will haunt my dreams this year.

This is very much the same team that came back and bit the White Sox in the butt at the end of last season. They lost one below-average outfielder and picked up a still above average one who should continue to succeed late in his career. The Tigers also let go of their erratic closer and will most likely have a closer by committee with candidates Bruce Rondon and Phil Coke among others vying for the job. Triple Crown winner Miguel Cabrera along with his partner in crime Prince Fielder will once again be counted on to lead the team’s run production, but they will also have Victor Martinez return to the lineup in 2013 and he will make this team that much more dangerous. Not to mention that if Austin Jackson and Andy Dirks build off their success in 2012 as well… Jesus the Tigers are scary. And Justin Verlander, Max Scherzer, Doug Fister, and Anibal Sanchez, too. I’ll just stop. They are going to win the division, they are too good.

I mean…they did the Harlem Shake. Your better than that Cleveland.

The Indians are a highly improved team in 2013. They have men who can hit at every position, power, speed, and on-base percentage. In fact, I think their lineup rivals Detroit’s in terms of scariness; and it’s not because their players can take you deep at will, but instead because they can win in so many different ways. Mark Reynolds, Jason Kipnis, and Nick Swisher can take you deep. Michael Bourn, Michael Brantley, and Drew Stubbs can run wild on the base paths, and Asdrubal Cabrera can continue to dazzle with his glove. The main sticking point to this team is their starting rotation. Justin Masterson is their ace, which really says something about A.) how bad this staff is, and B) how badly Ubaldo Jimenez had regressed from his days with the Rockies. If Masterson can pitch like the ace he is supposed to be, allegedly and Jimenez can return to his glory days with Colorado the Indians should be in good shape. Brett Myers will eat innings, Trevor Bauer should be up in the majors by mid-season, and Scott Kazmir has really impressed in Spring Training. Not to mention the Tribe really doesn’t need that great of a starting staff because their bullpen is one of the best in the American League with Vinny Pestano being one of the best guys for holds in the league and Chris Perez being the best closer in the division.

No pitcher with more intensity than Jake.

The White Sox lost a lot of key players from the 2012 almost champion team. AJ Pierzynski clubbed a career high twenty-two home runs in 2012 and that will be sorely missed in the 2013 version of the White Sox. Tyler Flowers has been the named the anointed one to replace all-time favorite Pierzynski. He probably won’t come close to AJ’s numbers in his first year, but he can be expected to produce at least fifteen home runs and drive in at least seventy runs on a year to year basis. Kevin Youkilis also left the team for the “Evil Empire” New York Yankees, and the Sox will most likely fill that hole with a platoon of Brent Morel and Jeff Keppinger. Hopefully Morel can turn into the hitter he was projected to become in the minors so that the Sox can have a consistency at the position, which has been unstable since the great Joe Crede left. Overall, the Sox lineup is starting to age as slugger Paul Konerko begins to head down the road to retirement. Adam Dunn is still a good power hitter and should be able to contribute to the offense and Alex Rios is still a wild card as far as consistent production goes. The 2013 lineup wont be the most offensively potent, however if there is one thing the Sox have always been able to do, its pitch. Ace, Chris Sale, was extended to five year deal, and will hopefully continue his prior dominance. Jake Peavy extended his contract with the team for two more seasons and should continue his mad-dog attitude on the mound. John Danks is returning from injury and is expected to be a big contributor as well. Not to mention Gavin Floyd will be back on the mound, barring he doesn’t get flipped at the deadline; and in addition Jose Quintana is looking to rebound from a poor second half performance and pitch the Sox to playoff contention in 2013. The baby bullpen will begin their sophomore season this year as well. Veterans like Matt Thornton, Jesse Crain, and Matt Lindstrom will be expected to lead the group of talented relievers including Nate Jones, Addison Reed, and Dylan Axelrod. The young bullpen did well in 2012, and will hopefully continue to be consistent in 2013. The Sox don’t look that good on paper, but they didn’t look good last year either; and the best thing is that the front office has shown willingness to make moves if the Sox are in contention, as evidenced by the Youkilis and Myers moves. They will give the Tigers & Indians problems and may compete for a wild card spot. Unfortunately we’ll all be seeing a lot of this in years to come.

If you haven’t had the chance to as of lately please say good-bye to the days of the Royals being absolute pushovers in the AL Central. Though I have them finishing in fourth place, the Royals will be highly competitive in 2013. Their lineup will feature young fixtures Eric Hosmer, Alex Gordon, Bill Butler, and Salvador Perez. Those four players are part of the Royals core of players who will begin to reek havoc upon the Central for years to come. The Royals did well down the stretch last year, despite not having the best pitching out there. Well GM Dayton Moore did something about that this winter, trading for starters James Shields and Wade Davis from the Tampa Bay Rays, and signing Ervin Santana in free agency. Not to mention they have mainstays Bruce Chen and Jeremy Guthrie returning to the rotation as well. The Royals will also have a very good bullpen which will feature Greg Holland, Aaron Crow, Luke Hochevar, and Kelvin Herrera. The Royals look good this year, but I can see them putting everything together yet. They will battle with the White Sox for third place but ultimately lose out. All the Twins have left.

The Twins will be your resident celler dweller this year. They traded away their best two outfielders this offseason, and have no offensive weapons aside from Joe Mauer and Josh Willingham (barring Justin Morneau has a great rebound season). The pitching staff is improved from last years as Scott Diamond will get some veteran help from the likes of Correia, Worley, and Pelfrey. There really isn’t much to say about this team as they seem to be drained of talent at the major league level. However Aaron Hicks is currently an exciting player to watch as he may win their center field job out of Spring Training without playing a game above AA. Also keep your eye on Miguel Sano, an exciting young shortstop with power, and Bryan Buxton who is a powerful outfielder. This team will finish last, but Terry Ryan is working to change that.