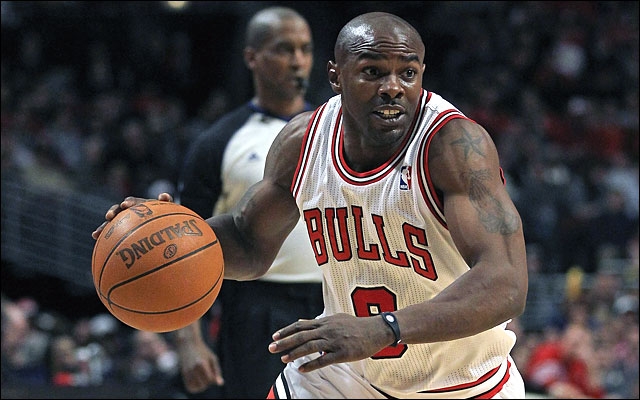 After a season away in Dallas, ESPN’s Mark Stein reported that veteran point guard Mike James is heading back to Chicago on a minimum contract. The 38-year old point guard played last season for the Dallas Mavericks. In 45 games, he averaged 6.1 points per game, 3.1 assists per game and 38.4% from the three point line in under 20 minutes a game. He was relied on to start ahead of Darren Collison for 23 games, and averaged 8.2 points, 4.4 assists and 41% from the three point line.

Hearing: Veteran guard Mike James on way back to Chicago after stint in Dallas. Signing deal with Bulls this week, I’m told, to go to camp

Mike James is not a bad signing, but he surely is a strange one. If the Bulls have one position locked up, it’s point guard. Derrick Rose is the highest paid player and star of the team, and he will play arguably around 38 minutes a game. Kirk Hinrich is considered one of the best backups in the league. Even Marquis Teague is considered to have big upside. What is the need for the fourth point guard?

It was assumed throughout the offseason that Chicago would sign a big man. Behind Joakim Noah, the Bulls only have Nazr Mohammed, and it was implied that the Bulls would want to do better than Mohammed at the backup center position, especially since Noah is relatively injury prone and Mohammed is old. I would assume that Taj Gibson picks up some minutes at backup center, but he is not a great fit at that position.

James is likely the last player that Chicago will sign this offseason, as they are into the luxury tax. James will be a decent player for Chicago in the minutes he gets, but he will get virtually zero minutes this season. This is a questionable pickup for Chicago.