Ozzie Guillen is a man of many talents.

Guillen had a very solid career in the MLB as a player. Notching a ROY award, a gold glove and three all star appearances under his belt. After a 16 year playing career, Guillen was handed the reigns of the Chicago White Sox. Guillen managed the White Sox for 8 seasons.

During these 8 years Guillen was somewhat successful. Of course In 2005 he managed the White Sox to a world series title, their first since 1917. After the title in ’05 the Sox would return to the postseason only once more under the command of Ozzie Guillen.

Though his managerial career was pretty much an up and down roller coaster, Ozzie guillen gave the baseball world some unforgettable moments and is no doubt even to this day, the most colorful man there ever was. Let’s look into the top 5 most unforgettable Ozzie guillen moments. Wrigley Field is viewed as one of the Crown jewels in the MLB. A Concrete baseball cathedral that masses of baseball fans flock to every year like some sort of religious rite of passage. If you ask Ozzie Guillen about Wrigley however, he will be nauseated.

You are going to take batting practice and the rats look bigger than a pig out there…I think the rats out there are lifting weights.

I wish I could do something about it. The Governor of Chicago, please build another one.

Because our fans are not stupid like Cubs fans. They know…Wrigley field is just a bar.

Ozzie has never been afraid to let umpires know how he feels about a call they made or that he just straight up doesn’t like an umpire. Im sure that Guillen has had countless arguments with umpires across his 9 year managerial career. Here are some of the best instances.

Here are some statements the very colorful Ozzie Guillen had to say about Joe West after a run in with him during the 2010 season.

“When you tell the manager to get the [bleep] off the field, I don’t think that’s a good way to handle situations. No matter what you say, what you do, how long you talk here, Major League Baseball doesn’t do [bleep] for anything. I’ll be waiting for my fine, get ’em the next day.”

This incident is actually the first explosive tirade of Ozzie Guillen’s managerial career and boy did Ozzie set the tone with this one. It was during the 2004 season and Hunter Wendelstadt ( son of former MLB umpire Harry Wendelstadt) was working. Wendelstadt incorrectly called Carlos Lee out on a steal attempt of second base and this set Guillen into a frenzy. He bumped into Wendelstadt which gave him an automatic one game suspension and before heading back into the dugout, Ozzie made sure to let Hunter Wendelstadt know how he felt about him.

“You’re not even a pimple on your daddy’s [butt]”

3.Ozzie Guillen and the love of the game

Ozzie Guillen is the definition of a gamer. Ozzie ate, slept, and breathed all things baseball. He loved the game so much he explained that when it comes time for Ozzie to join other deceased MLB legends he wants to be on the field.

“I hope I die on the field.  I hope when I walk to change the pitcher, I drop dead and that’s it. I know my family would be so happy that it happened on the field. They wouldn’t feel bad because that’s what I’ve always wanted to do.”

Im pretty sure that Ozzie Guillen’s heart is made up of dirt, pine-tar and the White Sox. 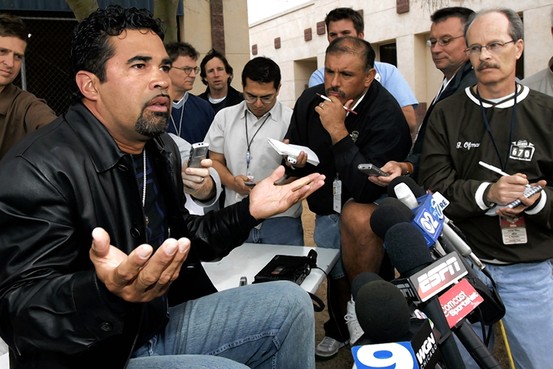 Nobody in the MLB enjoys losing. Ozzie absolutely loathed losing. He especially hates when his team is losing and nobody seems to care. He made this very clear in a statement to reporters at the end of the 2009 season.

“Very embarrassing. Not because we’re out of the pennant race. I’ve been dealing with this for how many months, six months? Dealing with this for the next two, three days, five days, six days, whatever I have left, I’m not going to tolerate. They think the season’s over for them? Yes. If they think the season’s over for me, no.

And I’m going to make it clear. It’s a bunch of [bleeps] out there watching football games like a piece of [bleep] with no pride the way they [bleep] play, and that’s embarrassing. … I’m not in a pennant race, but at least I have some pride.

When you go out there and you turn your TV on and watch stupid-[butt] football when those [bleep] football players don’t give a [bleep] about you, that’s embarrassing.”

I think it’s safe to say Ozzie was not a fan of his players participating in fantasy football.

In 2008, the White sox were in a series with the Boston Red Sox. During one of the games, a situation came up in which Ozzie opted to intentionally walk former MVP Dustin Pedrioa. Dustin Pedrioa was a heck of a ball player and never let his size determine how hard he played. however, intentionally walking pedrioa did not sit well with Guillen.

“I never thought I would walk a jockey. I must be the worst manager in the history of baseball right now, walking a guy that just came from being on the top of Big Brown to beat the White Sox.

Guillen was referring that because of Pedrioa’s petite size he was a horse jockey prior to his MLB career. No other manager would dare come up with this hilarious comparison. You just have to chock it up to Ozzie being Ozzie.

No matter the situation, Ozzie Guillen was guaranteed to make a spectacle of himself or make you laugh with a quote that makes you think “No way he just said that right?” These are just five instances of Ozzie’s very colorful career.